Kids Encyclopedia Facts
This page is about the actor and director. For his grandson, see King Baggot (cinematographer).

William King Baggot (November 7, 1879 – July 11, 1948) was an American actor, film director and screenwriter. He was an internationally famous movie star of the silent film era. The first individually publicized leading man in America, Baggot was referred to as "King of the Movies," "The Most Photographed Man in the World" and "The Man Whose Face Is As Familiar As The Man In The Moon."

His father was born in Ireland, and emigrated from County Limerick to the United States in 1852. He was a prominent St. Louis real estate agent.

Baggot attended Christian Brothers College High School, a prominent Catholic all-male secondary school, where he excelled at sports, was a star soccer and baseball player, and became captain of the soccer team. In 1894, King left St. Louis and went to Chicago, where he worked as a clerk for his uncle, Edward Baggot (1839–1903), whose business sold plumbing, gas and electric fixtures.

In the meantime, he sold tickets for the St. Louis Browns baseball team and worked as a clerk in the real estate business of his father. But acting proved so interesting that he decided to become professional.

Baggot began his career on the stage in a Shakespearean stock company and toured throughout the U.S. Following his first engagement, he performed under the management of Liebler and Company, one of the foremost producing companies at that time. He also toured under the management of Frohman, and the Shuberts, and played five weeks in New York in The Queen of the Highway. Other plays in which he appeared include the comedy revival Mrs. Wiggs of the Cabbage Patch, which had a run on Broadway in 1906, Salomy Jane and In the Bishop's Carriage.

While acting in stock in St. Louis, in the summer of 1909, Baggot worked with Marguerite Clark in Peter Pan and The Golden Garter. In the two weeks that remained of the season, he played small roles in Frou Frou and Jenny, which both starred Countess Venturini. When the season closed, he was cast as supporting player with Marguerite Clark in the Schubert touring production of The Wishing Ring, which was adapted by Owen Davis from a Dorothea Deakin story. Another cast member, Cecil B. DeMille, also staged the play.

When The Wishing Ring closed in Chicago, Baggot returned to New York to join another company. Upon a chance meeting with Harry Solter, who was directing movies for Carl Laemmle at Independent Moving Pictures Company (IMP), he was persuaded to go with Solter to the studio. Movies were then looked down on by the dramatic profession as a mere recording of stunts, but Baggot went along. He was amused at the violent gestures and jumping around of the players, taking none of it seriously. Baggot, however, became interested in the fledgling industry and later decided to give it a try and turn picture player.

Baggot's first film was the romance short The Awakening of Bess (1909) opposite Florence Lawrence. It was directed by Harry Solter, her husband, at IMP in Fort Lee, New Jersey. At a time when screen actors worked anonymously, Baggot and Lawrence became the first "movie stars" to be given billing, a marquee and promotion in advertising. 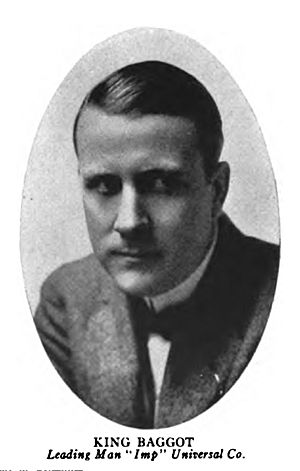 In April 1910, Baggot was at home with his mother and family in St. Louis, when the U.S. Census was taken there. He starred in at least 42 movies opposite Lawrence from 1909 to 1911. In the latter year, he starred in at least 16 movies with Mary Pickford, including Pictureland (1911). Pickford was hired to replace Lawrence after she and Solter broke their contracts, including the one-reel romance/drama Sweet Memories, which was directed by Thomas H. Ince.

Baggot also began writing screenplays and directing, all the while becoming a major star internationally. When he appeared "in person" at theatres he was mobbed at stage doors. By 1912, he was so famous that when he took the leading part in forming the prestigious Screen Club in New York, the first organization of its kind strictly for movie people, he was the natural choice for its first president. 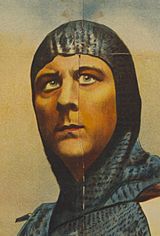 Baggot as title character in Ivanhoe (1913)

Baggot starred as Wilfred of Ivanhoe in Ivanhoe (1913), a feature length adventure drama that was filmed on location in England and at Chepstow Castle in Wales. He played the role as Jean Dumas in the drama Absinthe (1914), which was filmed in Paris. In his 1914 two-reel movie Shadows, Baggot directed as well as played the parts of ten different characters.

When he registered for the draft of World War I, on September 12, 1918, Baggot and his wife were living in New York City. He starred in the role as Harrison Grant in the 20-part spy thriller The Eagle's Eye (1918) opposite Marguerite Snow, an adaptation of former FBI Director William J. Flynn's experiences that was produced by Leopold and Theodore Wharton, and as Sheldon Steele (The Hawk) in the crime drama The Hawk's Trail (1919) opposite Grace Darmond.

As a director, he gave Marie Prevost her first starring role in the romantic comedy Kissed (1922). Baggot directed Mary Philbin and William Haines in the romance The Gaiety Girl (1924).

He formed his own production company, King Baggot Productions, and produced and directed The Home Maker (1925), a drama starring Clive Brook and Alice Joyce about the reversal of traditional roles between a husband and wife, which was released through Universal. That same year, Baggot directed William S. Hart in his most famous western, Tumbleweeds, a drama about the Oklahoma land rush of 1893.

Baggot and his wife, Ruth, who had separated on August 20, 1926, were divorced in 1930. She filed on grounds of desertion, stating in the complaint that he was a bad example to their son. She said he would return home after drinking and be in a boisterous mood. When the 1930 census was taken on April 7, Baggot was lodging by himself.

His alcoholism and problems with certain studio executives eventually ended Baggot's directing career. He turned to playing character roles, bit parts and even jobs as an extra, and appeared in scores of movies in that capacity through the 1930s and 1940s, including Mississippi (1935).

Baggot played the uncredited role as a policeman on the street in Bad Sister (1931), which starred Conrad Nagel and Sidney Fox, with Bette Davis in her first movie role. He had the role as Henry Field, a movie director, in the Monogram Pictures drama Police Court (1932) co-starring Henry B. Walthall, which told the story of a has-been alcoholic actor (Walthall) trying to make a comeback. In 1933, Baggot and former leading lady Florence Lawrence, Paul Panzer and another former great star of the silent era, Francis Ford, were given bit parts in what would be former co-star Mary Pickford's last movie, Secrets.

In her Los Angeles Times gossip column on March 1, 1946, Hedda Hopper wrote, "King Baggot, who used to be one of our top directors, is working as an extra in The Show-Off. While living at the Aberdeen Hotel in Venice, California, Baggot made his final movie appearance in the uncredited part of a bank employee in the comedy My Brother Talks to Horses (1947) starring Butch Jenkins and Peter Lawford. Illness then forced his retirement.

King Baggot died at age 68 from a stroke at a sanatorium in Los Angeles. His funeral service was conducted in the chapel of Pierce Brothers Hollywood Mortuary at 1 p.m. on Thursday, July 15, 1948. He is interred in Calvary Cemetery, East Los Angeles.

For his contributions to the film industry, Baggot received a motion pictures star on the Hollywood Walk of Fame in 1960. His star is located at 6312 Hollywood Boulevard.

All content from Kiddle encyclopedia articles (including the article images and facts) can be freely used under Attribution-ShareAlike license, unless stated otherwise. Cite this article:
King Baggot Facts for Kids. Kiddle Encyclopedia.