King Kong is a 2005 epic monster adventure film co-written, produced, and directed by Peter Jackson. A remake of the 1933 film of the same name, the film stars Naomi Watts, Jack Black, Adrien Brody, and, through motion capture, Andy Serkis as the title character. Set in 1933, King Kong tells the story of an ambitious filmmaker who coerces his cast and hired ship crew to travel to the mysterious Skull Island. There they encounter Kong, a legendary giant gorilla, whom they capture and take to New York City.

Filming for King Kong took place in New Zealand from September 2004 to March 2005. The project's budget climbed from an initial $150 million to a then-record-breaking $207 million. It was released on December 14, 2005 in Germany and the United States, and made an opening of $50.1 million. While it performed lower than expected, King Kong made domestic and worldwide grosses that eventually added up to $550 million, becoming the fourth-highest-grossing film in Universal Pictures history at the time and the fifth-highest-grossing film of 2005. It also generated $100 million in DVD sales upon its home video release.

The film garnered positive reviews from critics and appeared on several top ten lists for 2005. It was praised for its special effects, performances, sense of spectacle and comparison to the 1933 original while some criticised its 3-hour run time. It won three Academy Awards: Best Sound Editing, Best Sound Mixing and Best Visual Effects.

Apart from Kong, Skull Island is inhabited by dinosaurs and other large fauna. Inspired by Dougal Dixon's works, the designers imagined what 65 million years or more of isolated evolution might have done to dinosaurs and the other creatures.

In 1933, during the Great Depression, New York City vaudeville actress Ann Darrow is hired by financially troubled filmmaker Carl Denham to star in a film alongside actor Bruce Baxter. Ann learns her favorite playwright, Jack Driscoll, is the screenwriter. Filming takes place on a tramp steamer, the SS Venture, under the command of Captain Englehorn, and under Carl's pretense that it will be sailing to Singapore. In truth, Carl intends to sail to and film the mysterious Skull Island. Captain Englehorn has second thoughts about the voyage, prompted by his crew's speculation of trouble ahead. On the voyage, Ann and Jack fall in love.

Deep in the southern waters, the Venture receives a radio message informing Englehorn there is a warrant for Carl's arrest due to his defiance of the studio's orders to cease production. The message instructs Englehorn to divert to Rangoon, but the ship becomes lost in fog and runs aground on the rocky shore of Skull Island. Carl and his crew explore the island and are attacked by natives. Ann screams as she is captured, and a loud roar is heard beyond a wall. After this, the matriarch of the tribe targets Ann, muttering the word "Kong". Englehorn intervenes and rescues the film crew, but as they make efforts to leave the waters, a native sneaks onto the ship and kidnaps Ann. The natives offer Ann as a sacrifice to Kong, a 25 feet (7.6 m) tall gorilla. 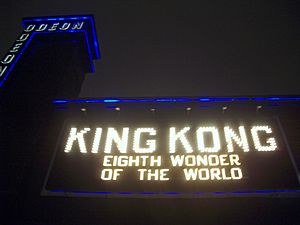 Jack notices Ann's disappearance, and the crew returns to the island, but are too late as Kong takes Ann and flees into the jungle. Carl manages to catch a glimpse of Kong, and becomes more determined to capture him on film. Though initially terrified of her captor, Ann wins Kong over with juggling and dancing, and begins to grasp Kong's intelligence and capacity for emotion.

Englehorn organizes a rescue party, led by his first mate Hayes and Jack, and accompanied by the film crew. The party is then caught in the middle of a pack of Venatosaurus saevidicus and the herd of Brontosaurus they are hunting, and several are killed in the resulting stampede. After this, Baxter leaves the group to return to the ship. The rest of the rescue party continues through the jungle, when Kong attacks and throws them into a ravine.

Kong returns to Ann and rescues her from three Vastatosaurus rex, before taking her to his lair in the mountains. The remaining rescue party are attacked by giant insects in the ravine, and are rescued by a returning Baxter, along with Englehorn. As Jack continues searching for Ann, Carl decides to capture Kong. Jack goes to Kong's lair, inadvertently waking him and provoking a swarm of flying Terapusmordax. As Kong fights the swarm, Ann and Jack escape. They arrive at the wall with Kong pursuing them, and Ann becomes distraught by what Carl plans to do. Kong bursts through the gate and attempts to get her back, killing several sailors, but is subdued when Carl knocks him out with chloroform. 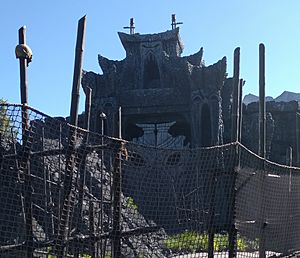 In New York City, Carl presents "Kong, the Eighth Wonder of the World" on Broadway, starring Baxter and an imprisoned Kong. Ann is played by an anonymous chorus girl, as she refused to take part in the performance. Kong becomes agitated at the camera's flashes, and angry when he realizes the girl on stage is not Ann. After breaking free from his chrome-steel chains, he wrecks the theater and chases Jack and attempts to search for Ann as well. Kong knocks Jack out, then encounters Ann again, who is able to calm him. Kong and Ann share a moment on a frozen pond in Central Park until the U.S. Army attacks.

Kong climbs with Ann onto the top of the Empire State Building, where he fights off six F8C-5 Helldiver Navy planes. Kong is mortally wounded by the planes' gunfire, and gazes at Ann for the last time before dying and falling from the building. As Ann is reunited with Jack, civilians, policemen, and soldiers gather around Kong's corpse. Carl makes his way through the crowd, takes one last long look at Kong and says, "It wasn't the airplanes. It was Beauty killed the Beast."

All content from Kiddle encyclopedia articles (including the article images and facts) can be freely used under Attribution-ShareAlike license, unless stated otherwise. Cite this article:
King Kong (2005 movie) Facts for Kids. Kiddle Encyclopedia.