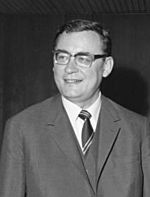 After his resignation he worked as German Ambassador to Israel until 1981 and Director General of the Deutsche Welle broadcaster from 1981 to 1987. He was also president of the Red Cross.

All content from Kiddle encyclopedia articles (including the article images and facts) can be freely used under Attribution-ShareAlike license, unless stated otherwise. Cite this article:
Klaus Schütz Facts for Kids. Kiddle Encyclopedia.