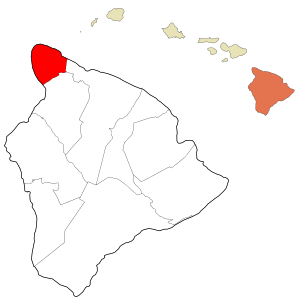 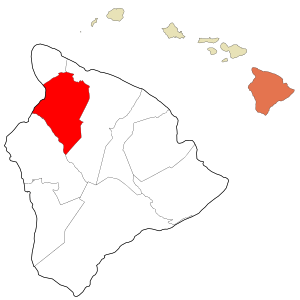 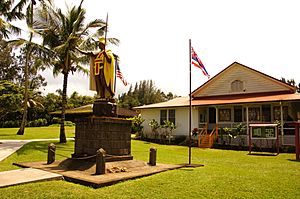 This is the original statue of the two Kamehameha Statues; this one cast in Paris and standing in the town of Kapaau.

Kohala is the name of the northwest portion of the island of Hawaiʻi in the Hawaiian Archipelago. In ancient Hawaii it was often ruled by an independent High Chief called the Aliʻi Nui. In modern times it is divided into two districts of Hawaii County: North Kohala and South Kohala. Locals commonly use the name Kohala to refer to the census-designated places of Halaʻula, Hāwī, and Kapaʻau collectively. The dry western shore is commonly known as the Kohala Coast, which has golf courses and seaside resorts. 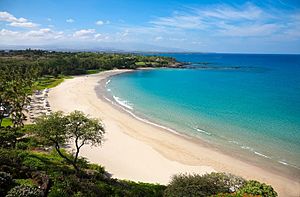 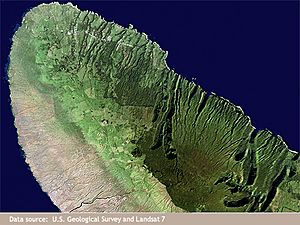 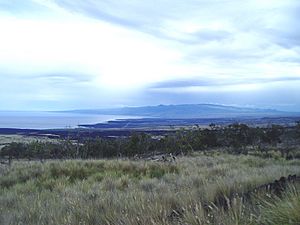 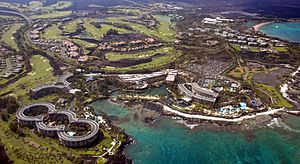 The natural habitats in Kohala range across a wide rainfall gradient in a very short distance - from less than 5 inches (130 mm) a year on the coast near Kawaihae to more than 150 inches (3,800 mm) year near the summit of Kohala Mountain, a distance of just 11 miles (18 km). Near the coast are remnants of dry forests, and near the summit is a cloud forest, a type of rainforest that obtains some of its moisture from "cloud drip" in addition to precipitation.

This precipitation allowed the northeast coast to be developed into sugarcane plantations, including one founded by Rev. Elias Bond used to fund his church and girls' seminary.

The Kohala Historical Sites State Monument includes Moʻokini Heiau, a National Historic Landmark. King Kamehameha I, the first King of the unified Hawaiʻian Islands, was born in North Kohala west of Hāwī, at the ancient site called the Moʻokini Heiau. The heiau is a living spiritual temple, and not just an historic artifact of the Hawaiian culture.

The original Kamehameha Statue stands in front of the community center in Kapaʻau, and duplicates are found at Aliʻiolani Hale in Honolulu, and within the U.S. Capitol building's statue gallery in Washington, D.C.

The Bond Historic District is located in the North Kohala District, with structures from the Bond family's 19th century missionary and homesteading period on the Kohala peninsula. The Bond District has three sections: 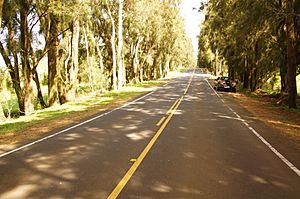 Ranch lands on both sides of a coniferous-lined Highway 250. 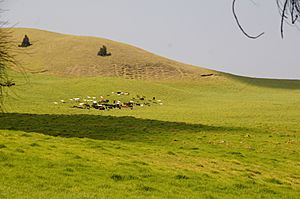 Views of ranch land may surprise some visitors to the Big Island. Looking southwest from the Kohala Mountain Road, Highway 250. 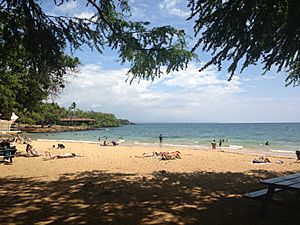 Kohala has two small airports. Upolu Airport is on Upolu Point at the northern tip of the island. Waimea-Kohala Airport is south of the town of Waimea, Hawaii County, Hawaii. Neither has commercial flights.

All content from Kiddle encyclopedia articles (including the article images and facts) can be freely used under Attribution-ShareAlike license, unless stated otherwise. Cite this article:
Kohala, Hawaii Facts for Kids. Kiddle Encyclopedia.