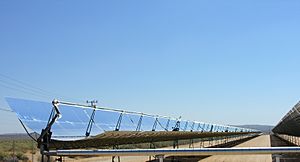 Kramer Junction (also known as "Four Corners" or "Sludge Junction") is an unincorporated community in San Bernardino County, California. Kramer Junction is located in the Mojave Desert at the intersection of U.S. Route 395 and State Route 58, (former US 466) 2.3 miles (3.7 km) east of Kramer. As of the 2010 census, ZIP Code 93516, which includes Kramer Junction, had a total population of 2,244. Almost all of those people live in Boron which is 6 miles west of Kramer Junction.

Around Kramer Junction, Caltrans proposed a $200 million project to realign and widen a 13.3-mile segment of State Route 58 from 0.4 miles west of the Kern County/San Bernardino County line to a point approximately 7.5 miles east of Kramer Junction from a two-lane conventional highway to a four-lane expressway, and construct an interchange at the junction of U.S. Route 395/State Route 58 to replace the at-grade intersection between the two highways, which had long been an infamous zone of highway backups. A groundbreaking ceremony for the Kramer Junction Expressway was held on January 19, 2018. The bypass was opened to traffic on October 24, 2019, and replaced the final two-lane portion of State Route 58 between Bakersfield and Barstow.

Solar Energy Generating Systems sites SEGS III-VII are located less than a mile to the northwest.

The United States Air Force once maintained a communications relay station east of Kramer Junction at Hawes Airfield, known as the Hawes Radio Relay Site, that had an antenna tower in excess of 1,200 feet tall. This tower was removed in the 1980s.

All content from Kiddle encyclopedia articles (including the article images and facts) can be freely used under Attribution-ShareAlike license, unless stated otherwise. Cite this article:
Kramer Junction, California Facts for Kids. Kiddle Encyclopedia.