This is a complete bibliography for American children's writer L. Frank Baum.

Other Lands around Oz 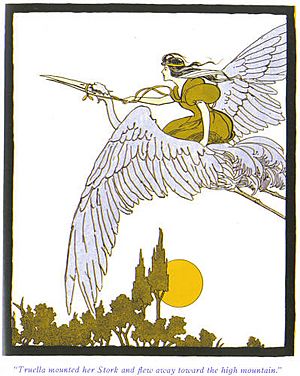 Princess Truella, a character from The Magical Monarch of Mo, illustrated by Frank Ver Beck

This list omits those stories that appeared in Our Landlady, American Fairy Tales, Animal Fairy Tales, Little Wizard Stories of Oz, and Queer Visitors from the Marvelous Land of Oz.

Baum has been credited as the editor of In Other Lands Than Ours (1907), a collection of letters written by his wife Maud Gage Baum.

Michael Patrick Hearn has identified 42 titles of stage plays associated with Baum, including those listed here and on the Oz books page, some probably redundant or reflective of alternate drafts, many for works that Baum may never have actually started. Listed below are those either known to have been performed (such as the lost plays of his youth) or that exist in at least fragmentary or treatment form.

The Wizard of Oz on screen and back to stage

Early film treatments of Baum's book included 1910 and 1925, as well as Baum's own venture The Oz Film Manufacturing Company. Metro Goldwyn Mayer made the story into the now-classic movie The Wizard of Oz (1939) starring Judy Garland as Dorothy Gale. It was only MGM's second feature-length film in three-strip Technicolor (the first being Sweethearts (1938), based on the Victor Herbert operetta). Among other changes, the film ended by treating the entire adventure as a dream. (Baum used this technique only in Mr. Woodchuck, and in that case the title character explicitly told the dreamer numerous times that she was dreaming.)

A completely new Tony Award-winning Broadway musical with an African-American cast, The Wiz, was staged in 1975 with Stephanie Mills as Dorothy. It was the basis for a 1978 film by the same title starring Diana Ross as an adult Dorothy and Michael Jackson as the Scarecrow.

The Wizard of Oz continues to inspire new versions, such as Disney's Return to Oz (1985), The Muppets' Wizard of Oz, Tin Man (a re-imagining of the story televised in late 2007 on the Sci Fi Channel), and a variety of animated productions. Today's most successful Broadway show Wicked provides a history to the two Oz witches used in the classic MGM film. Gregory Maguire, author of the novel Wicked on which the musical is based, chose to honor L. Frank Baum by naming his main character Elphaba—a phonetic play on Baum's initials.

All content from Kiddle encyclopedia articles (including the article images and facts) can be freely used under Attribution-ShareAlike license, unless stated otherwise. Cite this article:
L. Frank Baum bibliography Facts for Kids. Kiddle Encyclopedia.