Lake Aloha is a large shallow backcountry reservoir located at an elevation of 8,116 feet in the Sierra Nevada Range, west of Lake Tahoe in El Dorado County, in eastern California.

The reservoir is located in Desolation Valley, within the federally protected Desolation Wilderness area. The shortest and easiest approach is from Echo Lake by the Pacific Crest Trail. Alternately, it can be reached by the Glen Alpine Springs Trailhead, near the city of South Lake Tahoe. There is a moderate gain in elevation as you head west. From the south, Lake Aloha can be reached by the Ralston Peak Trail or cross country through Horsetail Falls and Desolation Valley. To reach the base of Price and Pyramid Peaks, in the Crystal Range of the Sierra Nevada, you have to traverse the Lake Aloha area.

The primary outflow from Lake Aloha is Pyramid Creek, which flows south for roughly four miles before it empties into the South Fork American River near Twin Bridges.

Pyramid Creek was first dammed to create Lake Aloha in 1875, creating a year-round water source for grazing cattle and inundating a collection of natural lakes known as the Medley Lakes. The dam was later raised and several auxiliary dams were constructed up to 1955. 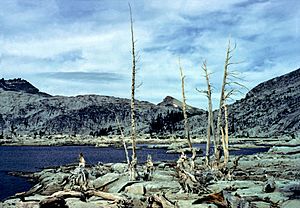 All content from Kiddle encyclopedia articles (including the article images and facts) can be freely used under Attribution-ShareAlike license, unless stated otherwise. Cite this article:
Lake Aloha Facts for Kids. Kiddle Encyclopedia.