Lake Talquin is a reservoir located on the Ochlockonee River between Leon County and Gadsden County in north Florida. The lake, located about 10 miles (15 km) west of Tallahassee, is south of Interstate 10 and bordered by State Road 20 on the east and State Road 267 on the west.

The lake was created by the construction of the C. H. Corn Hydroelectric Generating Station, and used for the generation of hydroelectric power. The name Talquin is a contraction of the names of the two cities the lake lies between, Tallahassee and Quincy. 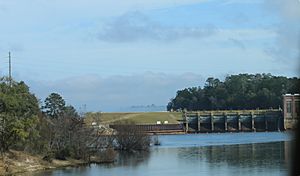 In 1970, approximately 20,000 acres (80 km²) of uplands and 10,000 acres (40 km²) of lake bottom were donated by Florida Power to the State of Florida to form Lake Talquin State Recreation Area, now Lake Talquin State Park, and Florida Power handed over the dam's ownership to the State of Florida; the City of Tallahassee acquired the lease to generate electricity at the dam in 1978 and in 1986 refurbished the powerplant to resume generation. In 2017, Tallahassee announced they would not be renewing their lease when it expired in 2022, choosing instead to focus on solar power.

Rolling hills and deep ravines surround the lake. The water level is usually at the 70-ft contour (70 feet above sea level), but it can vary by as much as 3 feet. The lake's nominal surface area is about 10,000 acres, or about 15 square miles, but because of the shallow gradient in some of the inlets and the seasonal variations in water level, it is not possible to state a more precise figure for the size of the lake.

The lake's shoreline measures more than 40 miles, and considerably more if one includes all of the nooks and crannies of the numerous inlets. Most of this shoreline is public land, and is therefore undeveloped.

Most of the lake measures approximately 1 mile in width. The total length of the lake is almost 20 miles (depending on where one decides the river ends and the lake begins).

Much of the shore of the lake is now part of Lake Talquin State Forest. The waters that now cover Lake Talquin’s floodplain are shallow except along the old channel of the river. The abundance of dead trees and stumps scattered about are reminders of the rich floodplain forest that once covered the area before the lake was formed. Most of the stumps can be found right under the water on the eastern end of the lake causing problems for boaters.

The lake is unusual as its easternmost point is only 11 miles from downtown Tallahassee, yet its shores remain pristine and recreational use remains sparse even today.

The area has forests of pines and hardwoods including sweetgum and a variety of oaks. 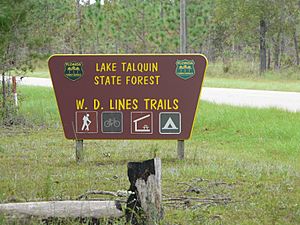 Entrance sign in the Lines Tract in Gadsden County.

Lake Talquin State Forest encompasses much of the southern and southwestern shores of the lake, with many boat landings and picnic areas, including Rock Bluff Recreation Area in Leon County. There are facilities for private picnics, parties, family reunions, weddings and receptions.

The lake is also home to the Florida State University Crew Club, a rowing club.

All content from Kiddle encyclopedia articles (including the article images and facts) can be freely used under Attribution-ShareAlike license, unless stated otherwise. Cite this article:
Lake Talquin Facts for Kids. Kiddle Encyclopedia.