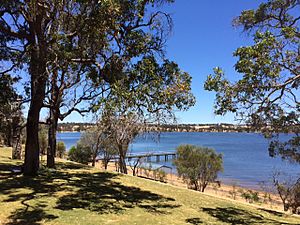 Lake Towerrinning or Towerrinning Lake is a permanent brackish lake in the Wheatbelt region of Western Australia located approximately 32 km (20 mi) south of Darkan, 44 km (27 mi) south west of Wagin and about 245 km (152 mi) south east of Perth. The lake is managed by the Department of Parks and Wildlife since it is used as a recreational facility; the Shire of West Arthur leases part of it as a gazetted water ski area.

The 180 ha (440-acre) lake is mostly situated within a 256 ha (630-acre) A class nature reserve and is one of a few relatively fresh permanent, large waterbodies that are valuable as a wildlife refuge. It is located close to but is not part of Arthur River. It forms part of the Towerrining Lake and Moodiarrup Swamps Important Bird Area and the Arthur River Wetlands System within the Blackwood basin.

Water enters the lake via an inlet swamp found to the north west and drains out, eventually reaching the Arthur River, through an outlet swamp on the southern side of the lake.

The landscape of the catchment is a mixture of low hills, gently undulating rises, narrow incised valleys and wide flats with duplex sandy gravelly soils and clay soils on the valley floors.

The traditional owners of the area are the Noongar peoples, who have inhabited the country for tens of thousands of years. The lake and its surroundings are spiritually and culturally significant to the Noongar as a corroboree ground and camping and meeting place with good hunting grounds.

The first European to visit the site was Thomas Bannister while exploring the area in 1832 and who described it as a "rushy lagoon".

Lands around the lake were being rapidly selected by farmers for cropping or pastoralism in 1909. The lake was bordered by a property owned by T.V.Williams in 1926.

The last recorded Indigenous Australian settlement was in 1938 when temporary camps were constructed to find bush foods. As a result of clearing the lake became larger through the 1940s with extra run-off but started to become saline in the 1960s.

In 1982 a caravan park, located near the southern shore line, commenced operations.

In 1989 the Lake Towerrinning catchment landcare group formed with a mission to improve water quality. In 1993 the construction of a lake re-diversion at the confluence of the Cordering and Morlup Creeks to the northwest of the lake was completed to allow diverting of fresher water into the lake from the catchment area and saline water away from the lake. 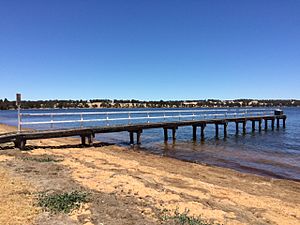 The lake has many facilities, including two jetties, a boat ramp, public toilets, change rooms, playground, barbeques, camping and picnic areas. Water skiing is permitted on the lake between sunrise and sunset but is prohibited within 30 m (98 ft) of the shore except within the designated water ski takeoff and landing areas. 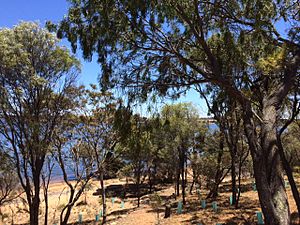 The area is an important habitat for a large range of species, including 14 species of frog, 43 species of reptile, 171 species of bird and 23 species of mammal. It is a wildlife refuge that supports a large population of birds, both local and migratory. The lake is recognised as an Important Bird Area by BirdLife Australia for the population of blue-billed ducks it supports. Other birds that can be seen are Australasian bittern, black cockatoo, peregrine falcon and the eastern great egret. Many reptile species have also been recorded around the lake, including the long-necked tortoise.

All content from Kiddle encyclopedia articles (including the article images and facts) can be freely used under Attribution-ShareAlike license, unless stated otherwise. Cite this article:
Lake Towerrinning Facts for Kids. Kiddle Encyclopedia.