Lanier County is a county located in the U.S. state of Georgia. As of the 2010 census, the population was 10,078. The county seat and only incorporated municipality is Lakeland. The county is named after the Georgia poet Sidney Lanier. 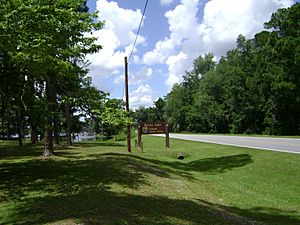 The Banks Lake National Wildlife Refuge, established in 1985, hosts approximately 20,000 visitors annually. It provides hiking, fishing, and boating opportunities on more than 4,000 acres (16 km2) of water, Banks Lake marsh, and swamp. The Robert Simpson III Nature Trail, dedicated in August 2001, is located within the Lakeland, Georgia city limits on 75 acres (300,000 m2) of pine and hardwood forests. The county is famous for its excellent fishing in the Alapaha River, Banks Lake National Wildlife Refuge as well as in its many small lakes.

Historic sites include Governor Eurith D. Rivers' home, which was moved from its original spot on Banks Lake to West Main Street in Lakeland in the early 1980s; Union Baptist Church, located near Georgia Highway 135; and Fender Cemetery, located east of Lakeland at the junction of U.S. 221 and Georgia Highway 37 on land that once belonged to David Fender. The site of the cemetery, in which many of the area's first settlers are buried, was chosen so that mourners would not have to ferry their dead across the river for burial. Also, the "Murals of Milltown," which depict community life in the 1920s, grace the exteriors of buildings in downtown Lakeland.

All content from Kiddle encyclopedia articles (including the article images and facts) can be freely used under Attribution-ShareAlike license, unless stated otherwise. Cite this article:
Lanier County, Georgia Facts for Kids. Kiddle Encyclopedia.