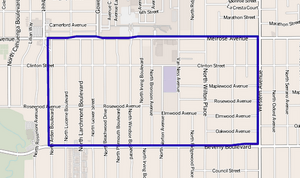 Map of Larchmont, Los Angeles, as delineated by the Los Angeles Times 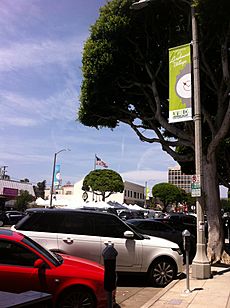 Larchmont is a densely populated, highly diverse, half-square-mile neighborhood in the central region of the City of Los Angeles, California, where more than half the residents were foreign-born. Larchmont is notable for its quaint old-town shopping street and well-maintained historic homes. It has four schools and one small park. It has been the site of early and recent motion picture shoots.

Larchmont Village was developed in the late 1800s. By 1920, it had become a streetcar suburb of Los Angeles. Julius LaBonte (1879-1968), a developer from the midwest, is credited as the visionary who made Larchmont Village what it is today. 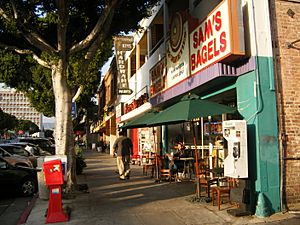 The 2000 U.S. census counted 8,631 residents in the 0.49-square-mile neighborhood—an average of 17,747 people per square mile, one of the highest densities in the county. In 2008, the city estimated that the population had increased to 9,195. The median age for residents was 34, about average for Los Angeles; the percentages of residents aged 19 to 49 and above were among the county's highest.

The median yearly household income in 2008 dollars was $47,780, average for Los Angeles, but a high percentage of households had an income of $20,000 or less. The average household size of 2.5 people was average for the city of Los Angeles. Renters occupied 72.9% of the housing stock, and house- or apartment owners 27.1%.

The percentages of never-married men and women, 42.1% and 36.9%, respectively, were among the county's highest.

All content from Kiddle encyclopedia articles (including the article images and facts) can be freely used under Attribution-ShareAlike license, unless stated otherwise. Cite this article:
Larchmont, Los Angeles Facts for Kids. Kiddle Encyclopedia.