Snow White is a fictional character and a main character from Walt Disney Productions' first animated feature film Snow White and the Seven Dwarfs (1937). The character of Snow White was derived from a fairy tale known from many countries in Europe, the best-known version being the one collected by the Brothers Grimm.

In Snow White and the Seven Dwarfs

Snow White first appears in the film Snow White and the Seven Dwarfs (1937). In "another land, far away," "many, many years ago," about the time of fairy tales of castles, knights, fair maidens, romance, magic and witches," a mysterious and icily beautiful woman with magical powers (a 1938 promotional brochure suggests that she is able to work her witchcraft having sold "herself body and soul to the bad spirits" of Germany's Harz mountains) has gained her royal position by marrying the widowed King, giving her rule over his kingdom before he died. "From that time on the cruel Queen ruled all alone, her every word was law, and all trembled in mortal fear of her anger." The vain Queen owned a magical mirror with which she could look upon whatever she wished. The Magic Mirror shows a haunted, smokey face of her familiar demon which replies to the Queen's requests. She regularly asks the mirror who is the fairest in the realm ("Magic mirror on the wall, who is the fairest one of all?" which is often misquoted as "Mirror mirror on the wall, who is the fairest of them all"), and the mirror would always reply that she is. The Queen has magical power only over her own domain, which is the castle.

In the film, Snow White is initially depicted as living under her wicked, vain stepmother, the Evil Queen, who forces Snow White to engage in menial labor, fearing that one day Snow White's beauty might become greater than her own. After many years, the Queen's Magic Mirror confirms Snow White as being the "fairest of them all", which causes the Queen to cast Snow White out and send a huntsman to kill her. But when he is unable to bring himself to do so, the huntsman helps Snow White escape into the forest. Snow White stumbles upon the home of the Seven Dwarfs, who happily aid her.

The Queen discovers that Snow White has survived, so she uses magic to disguise herself as an old hag and creates a poisoned apple that will put anyone who eats it into a “Sleeping Death" from which only the kiss of true love will revive. When the dwarfs are away the hag arrives at the dwarfs’ cottage and offers Snow White the poisoned apple, unbeknownst to her that it is the Queen in disguise. Snow White bites into the apple and falls into a coma. Upon discovering what had happened, the dwarfs track down the Queen; a short fight ensues and the Queen is killed. Believing her dead too, the dwarfs build an open grave for Snow White to rest on. Time passes and the Prince comes across Snow White. Saddened by her apparent death, he kisses her, causing her to awaken. As the Seven Dwarfs dance with joy, Snow White and the Prince go off to live together happily ever after.

Snow White is a princess, and the "fairest of them all". She is described by her stepmother's Magic Mirror as having "hair as black as ebony, lips as red as the rose, skin as white as snow." Though she is first seen in rags at the film's beginning, Snow White is most well known for her iconic dress with a blue bodice, puffy red and blue striped sleeves, an ankle-length yellow skirt with a self-sewn white petticoat and a high white collar. Along with yellow shoes, a brown cape with a red interior, and a red bow in her hair.

Snow White is innocent, kind, gentle, sweet, and cheerful. Her generous, trusting and helpful nature can cause her trouble, as other people might take advantage of it, such as her vain and evil stepmother. Although she is sensitive and soft-spoken, she can be energetic and stern, such as when she told the Dwarfs to wash their hands or when she scolded the birds for "frightening the poor old lady [the Queen disguised as an old peddler woman]". Snow White is motherly, compassionate and delights in keeping house for the lovable Seven Dwarfs while she waits to meet her beloved prince again. With her kindness and ethereal beauty, Snow White charms every creature in the kingdom except the Queen. She also shows great resilience and an inner strength against adversity.

In the original film, Snow White is depicted with black hair and brown eyes. She wears subtle make-up and rouge. The red color of her lips and cheeks resembles the red color of the apple which sends her into a deep sleep. She is not yet an adult woman, but a girl in her teenage years. She is chubby-cheeked and flat-chested. Her plump face is a characteristic typically associated with good health and kindness.

Snow White's legs are skinny, but her widened hips are an indication that she is a teenaged girl. She has short hair, and a curly bob hairstyle that gives her a childlike appearance. Her voice and speech patterns are also childlike. Her delicate high-heeled shoes complete her youthful appearance. While the Snow White depicted by the Brothers Grimm was about 7-years-old, Disney's Snow White is an adolescent (her exact age is never specified).

When lost in the forest, Snow White appears rather clumsy. Her dress gets stuck in tree branches, and she briefly falls into a lake. Yet, other scenes depict Snow White's movements as "graceful, stately, and elegant", indicative of an aristocratic upbringing. When she joins her unnamed prince on his horse, Snow White rides sidesaddle. Another indication of her "dainty" and "ladylike" style.

Snow White's clothing is traditionally feminine, and rather prudish in covering as much skin as possible. Her main costume is a long dress, with a white collar, blue and puffy sleeves, a yellow skirt, and a laced petticoat. She also wears a brown cape with a red interior, high-heeled shoes with a bow-like ribbon on each of them, and a red ribbon on her hair.

Snow White's innocent-looking appearance contrasts with that her stepmother's maturity, both in appearance and demeanor. Yet the narcissistic desire of the Queen to become the most beautiful woman sets the conflict between stepmother and stepdaughter. The mirror serves as the "male judge of female beauty" in this contest, and the Queen seemingly depends on the mirror's "judgmental voice" in her self-evaluation. While both women are depicted as beautiful in the film, the passive, sweet young girl is evaluated as being better than her fierce and cold-mannered stepmother.

While the film never states the location of its story, "the dwarfs’ home is decorated with carved wooden furniture and instruments". This home is surrounded by mountains and an extensive forest. These details suggest a location within the Black Forest of Germany, where there is a tradition of wood carving.

BuzzFeed views Snow White as a German woman, and suggests that a "historically accurate" Snow White would have been raised within the "austere and religious" culture of the Holy Roman Empire in the 16th century. 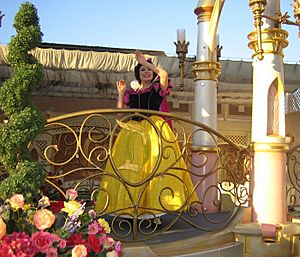 Snow White at a Disneyland street parade in 2008

Snow White's Scary Adventures is a dark ride dedicated to the princess and her story at the Disneyland, Tokyo Disneyland, and Disneyland Paris theme parks. Located in Fantasyland, it is one of the few remaining attractions operational on Disneyland's opening day in 1955. The ride was closed in Disney World in May 2012 as part of the New Fantasyland expansion.

Snow White is an official member of the Disney Princess line, a prominent franchise directed at young girls. The franchise covers a wide variety of merchandise, including but not limited to magazines, music albums, toys, clothes, and stationery.

In a season six episode of the sitcom series Full House known as The House Meets The Mouse Parts 1 & 2, Snow White appeared in Part 2. Snow White also had cameos in the films Who Framed Roger Rabbit (1988) and The Lion King 1½ (2004). In 2014, Snow White made a guest appearance on Sofia the First, in "The Enchanted Feast". She tells Sofia about how her stepmother tricked her by assuming a disguise, helping Sofia to determine that a visiting sorceress is actually an old foe, Miss Nettle. Snow White, alongside other Disney Princesses, appeared in the film Ralph Breaks the Internet. She, along with the other Princesses, are portrayed in what The Washington Post described as a parody of the "Disney Princess Industrial Complex", and are later seen wearing modern outfits inspired by their respective backstories.

In the ABC television series Once Upon a Time, an alternative version of Snow White is the daughter of King Leopold and Queen Eva and later stepdaughter of the Evil Queen (Regina Mills). She is the true love of Prince Charming, mother of Emma Swan and Prince Neal, and grandmother of Emma's son Henry. In Storybrooke, she appears as Mary Margaret Blanchard, Henry Mills' teacher at Storybrooke Elementary School.

Snow White's big role is in Snow White and the Seven Dwarfs where she plays a young princess who tries and escape her evil stepmother. The character won many awards for her role like the Grand Biennale Art Trophy from the Venice Film Festival, the New York Film Critics Circle, and the Academy of Motion Pictures Arts and Sciences. There was also an honorary custom-made Academy Award with the standard Oscar statuette and seven small statuettes that represented the seven dwarfs. Snow White is one of the few fictional characters with a star on the Hollywood Walk of Fame.

All content from Kiddle encyclopedia articles (including the article images and facts) can be freely used under Attribution-ShareAlike license, unless stated otherwise. Cite this article:
Snow White (Disney character) Facts for Kids. Kiddle Encyclopedia.