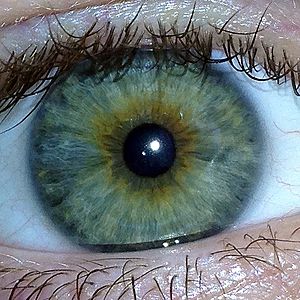 Close up of a human iris 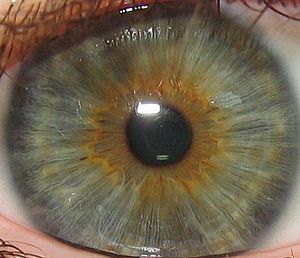 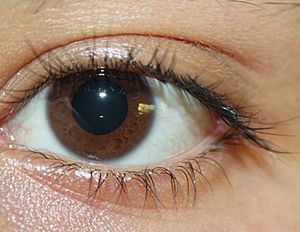 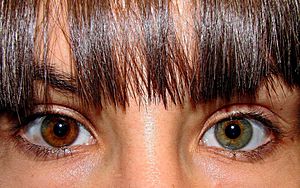 Eye color is a visible character caused by two factors: the pigmentation of the eye's iris, and way light is scattered as it hits the top layer of the iris.

In humans, the pigment of the iris varies from light brown to black. This depends on the amount of melanin in the iris. The appearance of blue, green and hazel eyes result from the Rayleigh scattering of light in the iris. A similar process accounts for the blueness of the sky. Neither blue nor green pigments are ever present in the human iris or fluid. Eye colour is an example of structural colour which varies according to the lighting conditions, especially for lighter-coloured eyes.

The brightly coloured eyes of many birds, reptiles and insects is caused by other pigments, such as pteridines, purines, and carotenoids.

The view that blue eye colour is a simple recessive trait is incorrect. Two main gene loci code for the eye pigment: OCA2 and HERC2. They sit next to each other on chromosome 15. Mutations (SNPs) to these genes account for much of the variation seen in eye colour. OCA2 mutations close to the 5′ regulatory region explain most human eye-color variation. An intron in HERC2 contains the promoter region for OCA2, affecting its expression.

There are about 15 other genes which have some effect on eye colour inheritance. This is an effect called epistasis, and is not unusual. 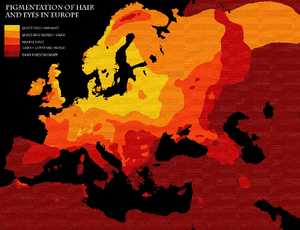 Carleton Coon created a chart by the original Martin scale. The numbering is reversed on the scale below in the (later) Martin–Schultz scale, which is (still) used in physical anthropology. Light and light-mixed eyes (16–12 in Martin scale)

Mixed eyes (11–7 in Martin scale) Mixture of light eyes (blue, gray or green) with brown when light and brown appearance is at the same level.

Amber eyes in sunlight – displaying an orange color rather than brown

Amber eyes are of a solid color and have a strong yellowish/golden and russet/coppery tint. This may be due to the deposition of the yellow pigment called lipochrome in the iris (which is also found in green eyes). Amber eyes should not be confused with hazel eyes; although hazel eyes may contain specks of amber or gold, they usually tend to comprise many other colors, including green, brown and orange. Also, hazel eyes may appear to shift in color and consist of flecks and ripples, while amber eyes are of a solid gold hue. Even though amber is considered to be like gold, some people have russet or copper colored amber eyes that many people mistake for hazel, though hazel tends to be duller and contains green with red/gold flecks, as mentioned above. Amber eyes may also contain amounts of very light gold-ish gray.

The eyes of some pigeons contain yellow fluorescing pigments known as pteridines. The bright yellow eyes of the great horned owl are thought to be due to the presence of the pteridine pigment xanthopterin within certain chromatophores (called xanthophores) located in the iris stroma. In humans, yellowish specks or patches are thought to be due to the pigment lipofuscin, also known as lipochrome. Many animals such as canines, domestic cats, owls, eagles, pigeons and fish have amber eyes as a common color, whereas in humans this color occurs less frequently. 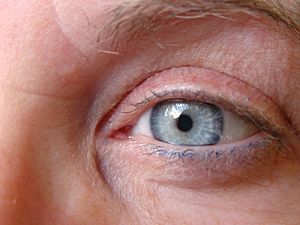 There is no blue pigmentation either in the iris or in the ocular fluid. Dissection reveals that the iris pigment epithelium is brownish black due to the presence of melanin. Unlike brown eyes, blue eyes have low concentrations of melanin in the stroma of the iris, which lies in front of the dark epithelium. Longer wavelengths of light tend to be absorbed by the dark underlying epithelium, while shorter wavelengths are reflected and undergo Rayleigh scattering in the turbid medium of the stroma. This is the same frequency-dependence of scattering that accounts for the blue appearance of the sky. The result is a "Tyndall blue" structural color that varies with external lighting conditions.

In humans, the inheritance pattern followed by blue eyes is considered similar to that of a recessive trait (in general, eye color inheritance is considered a polygenic trait, meaning that it is controlled by the interactions of several genes, not just one). In 2008, new research tracked down a single genetic mutation that leads to blue eyes. "Originally, we all had brown eyes," said Eiberg. Eiberg and colleagues suggested in a study published in Human Genetics that a mutation in the 86th intron of the HERC2 gene, which is hypothesized to interact with the OCA2 gene promoter, reduced expression of OCA2 with subsequent reduction in melanin production. The authors suggest that the mutation may have arisen in the northwestern part of the Black Sea region, but add that it is "difficult to calculate the age of the mutation."

Blue eyes are common in northern and eastern Europe, particularly around the Baltic Sea. Blue eyes are also found in southern Europe, Central Asia, South Asia, North Africa and West Asia. In West Asia, a proportion of Israelis are of Ashkenazi origin, among whom the trait is relatively elevated (a study taken in 1911 found that 53.7% of Ukrainian Jews had blue eyes).

The same DNA sequence in the region of the OCA2 gene among blue-eyed people suggests they may have a single common ancestor.

DNA studies on ancient human remains confirm that light skin, hair and eyes were present at least tens of thousands of years ago on Neanderthals, who lived in Eurasia for 500,000 years. As of 2016[update], the earliest light-pigmented and blue-eyed remains of Homo Sapiens were found in 7,700 years old Mesolithic hunter-gatherers from Motala, Sweden.

Blue eyes are rare in mammals; one example is the recently discovered marsupial, the blue-eyed spotted cuscus (Spilocuscus wilsoni). The trait is hitherto known only from a single primate other than humans – Sclater's lemur (Eulemur flavifrons) of Madagascar. While some cats and dogs have blue eyes, this is usually due to another mutation that is associated with deafness. But in cats alone, there are four identified gene mutations that produce blue eyes, some of which are associated with congenital neurological disorders. The mutation found in the Siamese cats is associated with strabismus (crossed eyes). The mutation found in blue-eyed solid white cats (where the coat color is caused by the gene for "epistatic white") is linked with deafness. However, there are phenotypically identical, but genotypically different, blue-eyed white cats (where the coat color is caused by the gene for white spotting) where the coat color is not strongly associated with deafness. In the blue-eyed Ojos Azules breed, there may be other neurological defects. Blue-eyed non-white cats of unknown genotype also occur at random in the cat population.

Dark brown iris is most common in Africa, East Asia and Southeast Asia.

Light brown iris can be found in Europe, West Asia, South Asia, and among the Americas.

In humans, brown eyes result from a relatively high concentration of melanin in the stroma of the iris, which causes light of both shorter and longer wavelengths to be absorbed.

Dark brown eyes are dominant in humans and in many parts of the world, it is nearly the only iris color present. Dark pigment of brown eyes is common in Europe, South Europe, East Asia, Southeast Asia, Central Asia, South Asia, West Asia, Oceania, Africa, Americas, etc. as well as parts of Eastern Europe and Southern Europe. The majority of people in the world overall have brown eyes to dark brown eyes.

Light or medium-pigmented brown eyes can also be commonly found in South Europe, among the Americas, and parts of Central Asia (Middle East and South Asia).

Like blue eyes, gray eyes have a dark epithelium at the back of the iris and a relatively clear stroma at the front. One possible explanation for the difference in the appearance of gray and blue eyes is that gray eyes have larger deposits of collagen in the stroma, so that the light that is reflected from the epithelium undergoes Mie scattering (which is not strongly frequency-dependent) rather than Rayleigh scattering (in which shorter wavelengths of light are scattered more). This would be analogous to the change in the color of the sky, from the blue given by the Rayleigh scattering of sunlight by small gas molecules when the sky is clear, to the gray caused by Mie scattering of large water droplets when the sky is cloudy. Alternatively, it has been suggested that gray and blue eyes might differ in the concentration of melanin at the front of the stroma.

Gray eyes are most common in Northern and Eastern Europe. Gray eyes can also be found among the Algerian Shawia people of the Aurès Mountains in Northwest Africa, in the Middle East, Central Asia, and South Asia. Under magnification, gray eyes exhibit small amounts of yellow and brown color in the iris.

A Chinchilla Persian with sea-green eyes

As with blue eyes, the color of green eyes does not result simply from the pigmentation of the iris. The green color is caused by the combination of: 1) an amber or light brown pigmentation in the stroma of the iris (which has a low or moderate concentration of melanin) with: 2) a blue shade created by the Rayleigh scattering of reflected light. Green eyes contain the yellowish pigment lipochrome.

Green eyes probably result from the interaction of multiple variants within the OCA2 and other genes. They were present in south Siberia during the Bronze Age.

They are most common in Northern, Western and Central Europe. In Ireland and Scotland 14% of people have brown eyes and 86% have either blue or green eyes, In Iceland, 89% of women and 87% of men have either blue or green eye color. A study of Icelandic and Dutch adults found green eyes to be much more prevalent in women than in men. Among European Americans, green eyes are most common among those of recent Celtic and Germanic ancestry, about 16%. 37.2% of Italians from Verona and 56% of Slovenes have blue/green eyes.

Green eyes are common in Tabby cats as well as the Chinchilla Longhair and its shorthaired equivalents are notable for their black-rimmed sea-green eyes.

Hazel eyes are due to a combination of Rayleigh scattering and a moderate amount of melanin in the iris' anterior border layer. Hazel eyes often appear to shift in color from a brown to a green. Although hazel mostly consists of brown and green, the dominant color in the eye can either be brown/gold or green. This is how many people mistake hazel eyes to be amber and vice versa. This can sometimes produce a multicolored iris, i.e., an eye that is light brown/amber near the pupil and charcoal or dark green on the outer part of the iris (or vice versa) when observed in sunlight.

Definitions of the eye color hazel vary: it is sometimes considered to be synonymous with light brown or gold, as in the color of a hazelnut shell.

Hazel eyes are common throughout Caucasoid populations, in particular in regions where blue, green and brown eyed peoples are intermixed.

The eyes of people with severe forms of albinism may appear red under certain lighting conditions owing to the extremely low quantities of melanin, allowing the blood vessels to show through. In addition, flash photography can sometimes cause a "red-eye effect", in which the very bright light from a flash reflects off the retina, which is abundantly vascular, causing the pupil to appear red in the photograph. Although the deep blue eyes of some people such as Elizabeth Taylor can appear violet at certain times, "true" violet-colored eyes occur only due to albinism.

All content from Kiddle encyclopedia articles (including the article images and facts) can be freely used under Attribution-ShareAlike license, unless stated otherwise. Cite this article:
Eye colour Facts for Kids. Kiddle Encyclopedia.