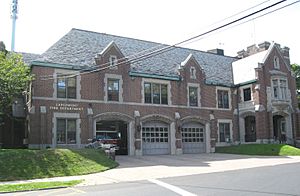 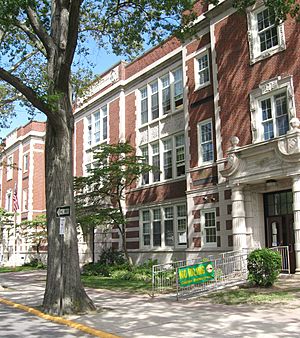 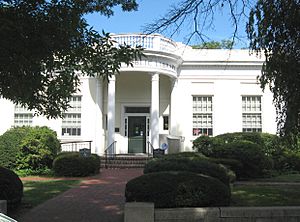 Larchmont is a village located within the Town of Mamaroneck in Westchester County, New York, approximately 18 miles (29 km) northeast of Midtown Manhattan. The population of the village was 5,864 at the 2010 census.

In July 2005, CNN/Money and Money magazine ranked Larchmont 11th on its list of the 100 Best Places to Live in the United States.

Originally inhabited by the Siwanoy (an Algonquian tribe), Larchmont was discovered by the Dutch in 1614. In 1661, John Richbell, a merchant from Hampshire, England, traded a minimal amount of goods and trinkets with the Siwanoy in exchange for land that is today known as the Town of Mamaroneck. The purchase included three peninsulas of land that lay between the Mamaroneck River to the east, and Pelham Manor to the west. The east neck is now known as Orienta while the middle neck is what is now known as Larchmont Manor. The third neck was later sold and is now known as Davenport Neck in New Rochelle. The purchase was contested by Thomas Revell who, one month following Richbell's purchase, bought the land from the Siwanoy at a higher price. Richbell petitioned Governor Stuyvesant, Director General of the Colonies of the New Netherland, and Richbell was issued the land patent in 1662. In 1664 Great Britain took control of the colonies and Richbell received an English title for his lands in 1668 whereupon he began to encourage settlement. In 1675 Richbell leased his "Middle Neck" to his brother however when he died in 1684 none of his original property remained in his name. In 1700, Samuel Palmer, who had been elected the Town's first supervisor in 1697, obtained the original leases on the "Middle Neck", and in 1722 the Palmer family obtained full title to the land which included what is now the Incorporated Village of Larchmont.

Larchmont's oldest and most historic home, the "Manor House" on Elm Avenue, was built in 1797 by Peter Jay Munro. Munro was the nephew of John Jay, the first Chief Justice of the United States Supreme Court, and was later adopted by Jay. At the beginning of the 19th Century, Munro was active in the abolitionist movement, helping to found the New York State Manumission Society, along with his uncle and Alexander Hamilton. In 1795 Munro had purchased much of the land owned by Samuel Palmer and by 1828 he owned all of the "Middle Neck" south of the Post Road and much of the land north of the Post Road as well. Munro later became a lawyer with Aaron Burr's law firm and built a home in Larchmont Manor known as the Manor House. Munro's house faced towards the Boston Post Road (the back is now used as the front), which tended to generate a lot of dust in summer months. To combat this, his gardener imported a Scottish species of larch trees that were known to be fast growing. These were planted along the front of the property, eventually giving the village its name.

When Munro died in 1833, his son Henry inherited the property which he subsequently lost and sold at auction in 1845 to Edward Knight Collins, owner of a steamship line. By the end of the Civil War in 1865, Collins had gone bankrupt and his estate was put up for auction and purchased by Thompson J.S. Flint. Flint divided the estate into building lots and called his development company the Larchmont Manor Company. Flint converted the Munro Mansion into an inn for prospective buyers and reserved some waterfront land for use as a park for the future residents of the Manor. After 1872 the area became a popular summer resort for wealthy New Yorkers. The arrival of the New York & New Haven Railroad replaced the stagecoach and steamboat as the main mode of transportation to and from New York City, making it much easier to commute and thus, modernizing travel which ultimately helped develop much of Westchester from farmland into suburbs by the 1900s.

The New York legislature created Mamaroneck as a town in 1788, which includes a part of the Village of Mamaroneck, The Village of Larchmont, and the unincorporated area in the Town of Mamaroneck. This three part division occurred in the 1890s to meet the growing demand for municipal services which the town could not provide. At the time, a town was defined as only being able to provide basic government functions leaving residents of Larchmont in need of adequate water supply, sewage disposal, garbage collection, and police and fire protection. In 1891 the residents of Larchmont Manor obtained a charter from the legislature in which they incorporated that section of Town into a village. In order to comply with a law requiring incorporated villages to have at least 300 inhabitants per square mile, the boundaries of the newly incorporated Larchmont village were expanded beyond the Manor's 288 acres (1.17 km2) to include land to its north and south of the railroad, and east to Weaver Street.

After the advent of the automobile, Larchmont quickly transitioned from a resort community into one of the earliest suburbs in the United States, catering to wealthy individuals commuting to and from New York City for work on a daily basis. Many of the Victorian "cottages" and a grand hotels (such as the Bevan House and Manor Inn) remain to this day, though these have been converted to other uses such as private residences. The Larchmont Yacht Club hosts an annual Race Week competition (2007 marked the 110th running of this event). It is adjacent to Manor Park, which was designed by Jeremiah Towle, an early summer resident of Larchmont Manor and an engineer. The Larchmont Shore Club (near the Larchmont Yacht Club) hosts an annual Swim Across America challenge, across Long Island Sound.

Larchmont and neighboring Mamaroneck and New Rochelle are noted for their significant French American populace.

According to the United States Census Bureau, the village has a total area of 1.1 square miles (2.8 km2), all of it land.

A source of confusion for non-locals is that a large portion of the area served by the Larchmont Post Office (zip code 10538) is actually not in the incorporated Village of Larchmont, but is part of the "unincorporated area" of the Town of Mamaroneck.

There were 2,418 households out of which 38.8% had children under the age of 18 living with them, 62.6% were married couples living together, 6.3% had a female householder with no husband present, and 29.3% were non-families. 25.8% of all households were made up of individuals and 10.9% had someone living alone who was 65 years of age or older. The average household size was 2.66 and the average family size was 3.25.

All content from Kiddle encyclopedia articles (including the article images and facts) can be freely used under Attribution-ShareAlike license, unless stated otherwise. Cite this article:
Larchmont, New York Facts for Kids. Kiddle Encyclopedia.