Windsor Square is a small, historic and wealthy urban neighborhood in Central Los Angeles, California. It is highly diverse in ethnic makeup, with a population older and better-educated than the city norm. Many notable Los Angeles residents have lived in Windsor Square, and it is the site of the official residence of the mayor of the city. It is served by a vest-pocket public park. 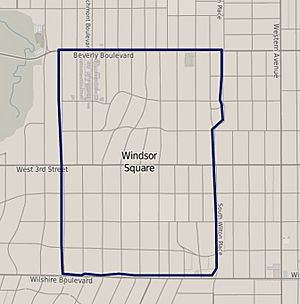 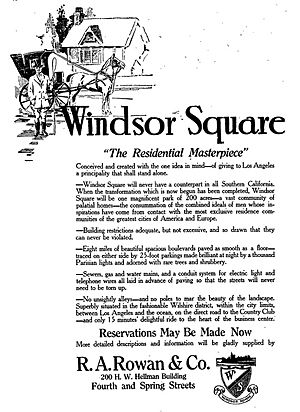 In 2008, the neighborhood had an estimated population of 6,197. According to the 2000 census, Windsor Square was highly diverse, with the percentage of Asian people being high for the county. The racial breakdown was 41.6% Asian, 37.7% white, 14.8% Latino, 4.3% black, and 1.6% other. About a third (33.5%) of the residents were born outside the United States, considered a high ratio for Los Angeles, the most common country being Korea at 57.7%.

The tree-lined neighborhood, 0.68 mile in area, is sometimes used as background in crime films because of its multimillion-dollar homes and its "film noir-era look."

Windsor Square is bounded on the west by Arden Avenue, on the north by Beverly Boulevard, on the east by South Wilton Place and on the south by Wilshire Boulevard.

Relation of Windsor Square to nearby places:

Robert L. Burns Park, on the southwest corner of North Van Ness Avenue and Beverly Boulevard, is an unstaffed pocket park. Beginning in 1980, resident Barbara McRae, began writing letters to city officials, and the next year she presented petitions with 2,248 signatures supporting the idea of private security patrols for the city facility. The city responded by building a 12-foot masonry wall and a chain-link fence between the park and neighboring homes. By 1989, though, criminal activity had spread throughout the surrounding neighborhood, and the Windsor Square Property Owners Association requested that the park be closed at sunset and that it be fenced, gated and locked. On December 3, 1990, an $85,000 tubular steel perimeter fence was officially installed and put into use.

All content from Kiddle encyclopedia articles (including the article images and facts) can be freely used under Attribution-ShareAlike license, unless stated otherwise. Cite this article:
Windsor Square, Los Angeles Facts for Kids. Kiddle Encyclopedia.