Lars Fosgaard Eller (born 8 May 1989) is a Danish professional ice hockey player for the Washington Capitals of the National Hockey League (NHL). Nicknamed "the Tiger", he was drafted by the St. Louis Blues in the first round, 13th overall in the 2007 NHL Entry Draft. He later joined the Montreal Canadiens, where he played six seasons before being traded to the Capitals in 2016. He became the first person born in Denmark to win the Stanley Cup when the Capitals won in 2018, notably scoring the Stanley Cup-winning goal.

During the 2007 NHL Entry Draft, Eller was selected thirteenth overall by the St. Louis Blues, the highest ranking for a Danish born and trained player in NHL history until friend and former teammate Mikkel Bødker was selected number eight overall by the Arizona Coyotes in the 2008 NHL Entry Draft. (Danish-born Jan Popiel was drafted tenth overall in the 1964 NHL Amateur Draft but grew up in and became a citizen of Canada before making his pro debut.)

Eller spent part of the 2007–08 season with Borås in the HockeyAllsvenskan, on loan from Frölunda.

Eller moved to North America for the 2009–10 season. His preseason was spoiled by mononucleosis and, as a result, he started the season playing for the Peoria Rivermen in the American Hockey League (AHL). He was called up by the St. Louis and made his NHL debut on 5 November 2009 in a game against the Calgary Flames in which the Blues lost 2–1. He scored the Blues' lone goal, beating Miikka Kiprusoff off of a deflection and had three shots on goal in 9:42 minutes of ice time. Eller appeared in five NHL games before returning to Peoria, finishing the season with seven games for the Blues.

With the Rivermen, Eller was named AHL Rookie of the Month for March 2010 and was also selected for the 2009–10 AHL All-Rookie Team.

On 17 June 2010, Eller was traded by the Blues to the Montreal Canadiens, along with Ian Schultz, in exchange for goaltender Jaroslav Halák. On 24 November 2010, Eller scored his first goal with the Canadiens, wristing one past Los Angeles Kings goaltender Jonathan Bernier.

On 4 January 2012, Eller scored 4 goals and an assist in a 7–3 victory against the Winnipeg Jets, his first career hat trick. He was the first Montreal Canadien to score 4 goals in one game since Jan Bulis in 2006. During the 2012–13 NHL lockout, Eller signed a temporary contract with Finnish top-flight club, JYP Jyväskylä. He recorded 5 goals and 10 assists in 15 games. 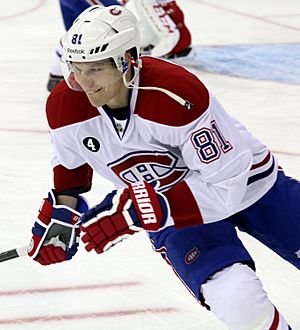 Eller with the Montreal Canadiens in January 2015

On 2 May 2013, an open ice check from Ottawa Senators' defenseman Eric Gryba knocked Eller unconscious during a playoff game at the Bell Centre. He was later diagnosed with a concussion, along with dental and facial fractures. On 24 July 2014, Eller signed a four-year, $13 million contract extension with the Canadiens.

After six seasons, Eller's tenure with the Canadiens came to an end at the 2016 NHL Entry Draft, as he was traded to the Washington Capitals in exchange for two second-round picks in 2017 and 2018 on 24 June 2016. On 10 February 2018, Eller signed a five-year, $17.5 million contract extension with the Capitals.

On 7 June 2018 Eller won his first Stanley Cup when the Capitals defeated the first-year Vegas Golden Knights in five games. Eller scored the Cup-clinching goal, and finished the playoffs with seven goals and 18 points in 24 games. He became the first NHL player born in Denmark to win a Stanley Cup.

Lars Eller grew up in Rødovre, Denmark. His father, Olaf Eller, is a former Danish international ice hockey player and former coach of several teams in the Superisligaen, as well as Troja/Ljungby in Sweden. Olaf Eller is also a color commentator for Danish TV 2 Sport for the IIHF World Championships and occasionally for games in the AL-Bank Ligaen. He is also head coach of Esbjerg IK. His younger brother Mads (born 25 June 1995) played one season for the Adirondack Thunder of the ECHL, and had also played junior hockey for Frölunda HC and represented Denmark at the 2012 World Junior Ice Hockey Championships. Their half brother Michael Smidt has also represented the Danish national team and played all his career in Denmark - including 17 seasons for the Rødovre Mighty Bulls where he also was captain for six seasons before he retired in 2014. Eller and his wife, Julie, have two children.

All content from Kiddle encyclopedia articles (including the article images and facts) can be freely used under Attribution-ShareAlike license, unless stated otherwise. Cite this article:
Lars Eller Facts for Kids. Kiddle Encyclopedia.