Las Trampas or just Trampas (Spanish: "traps"), is a small unincorporated town in Taos County, New Mexico. Founded in 1751, its center retains the original early Spanish colonial defensive layout from that time, as well as the 18th-century San José de Gracia Church, one of the finest surviving examples of Spanish Colonial church architecture in the United States. The village center was designated a National Historic Landmark District (the Las Trampas Historic District) in 1967.

Las Trampas is located on the scenic High Road to Taos (New Mexico State Road 76) in the Sangre de Cristo Mountains, it is approximately halfway between Santa Fe to the south and Taos to the north.

The town has a post office, with the ZIP code 87576; the US Postal Service prefers the name "Trampas". No ZIP Code Tabulation Area information for 87576 is available from Census 2000. 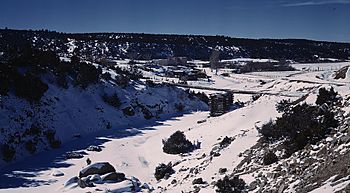 View of Trampas and the Sangre de Cristo Mountains, 1943.

Founded in 1751 by twelve Spanish families from Santa Fe, the town is known for the San José de Gracia Church, built between 1760 and 1776 and considered a model of the adobe colonial Spanish missions in New Mexico. The church was once used by Los Hermanos Penitentes, a flagellant Catholic order founded in Spanish era Santa Fe de Nuevo México.

The Las Trampas Historic District was established by the National Park Service (NPS) in 1967. The San José de Gracia Church was designated a National Historic Landmark in 1970. It is on the National Register of Historic Places in Taos County, New Mexico.

All content from Kiddle encyclopedia articles (including the article images and facts) can be freely used under Attribution-ShareAlike license, unless stated otherwise. Cite this article:
Las Trampas, New Mexico Facts for Kids. Kiddle Encyclopedia.