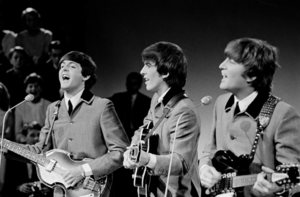 The songwriting duo of John Lennon and Paul McCartney is one of the best-known and most successful musical partnerships in history. Between 1962 and 1969, they wrote about 180 credited songs. Most of the songs were recorded by The Beatles. Other songs credited to Lennon–McCartney were originally released not by the Beatles but by other artists, especially those managed by Brian Epstein. Recording a Lennon–McCartney song helped start new artists' careers. For example, one of The Rolling Stones' first singles, "I Wanna Be Your Man", was a Lennon–McCartney song.

All content from Kiddle encyclopedia articles (including the article images and facts) can be freely used under Attribution-ShareAlike license, unless stated otherwise. Cite this article:
Lennon/McCartney Facts for Kids. Kiddle Encyclopedia.