Historic Leonardtown includes both a large public high school and a public middle school Leonardtown Middle School as well as a Catholic high school and an elementary school Leonardtown Elementary School, offices of the county government, and St. Mary's Hospital which serves the healthcare needs of the county. The College of Southern Maryland maintains a growing satellite campus within city limits, including an aquatic center. An upscale home development located in the Breton Bay area is just outside town, notable for both its country club golf course and swimming pool.

Leonardtown's population has grown significantly since 1990 as a result of the town's proximity to Patuxent River Naval Air Station and the Washington metro area.

Records indicate that by 1654, county court was conducted at the house of John Hammond in the area known as "Newtown" or "Newtowne Hundred". During the late 17th century, it appears that court was held at various homes throughout Newtown, and that it wasn't until 1708 that an official town with a designated courthouse was established. It was during this same year that Phillip Lynes, then Mayor of St. Mary's City, Maryland's Colonial Capital, designated fifty acres of land at the head of "Brittons Bay" to be divided into 100 lots. He further ordered that one lot be set aside for a county courthouse to be built at an expense not to exceed 12,000 pounds of tobacco. At this time, Newtown was promptly renamed Seymour Town in honor of Governor John Seymour. Nearly 20 years later, Seymour Town was renamed again to Leonard Town in honor of Benedict Leonard Calvert, who was Maryland's Governor during this period. In the decades that followed, Leonard Town became the place where local residents conducted their official business with the colony. Farm products were regularly shipped through the port. 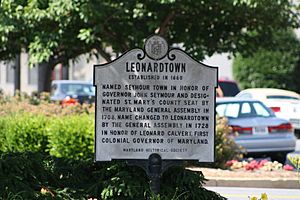 During the War of 1812, the British blockaded the Chesapeake Bay. 1,000 British Marines invaded the town. This crippled the Tidewater economy and subjected areas to repeated British plundering and destruction. By 1860, the Town had approximately 35 dwellings within these corporate limits. It was home to the County's newspaper, two hotels and several stores. During the American Civil War, a Union Naval contingent occupied Leonardtown, searching all houses for weapons and supplies intended for shipment across the Potomac River to Virginia as Southern Maryland and the town's sympathies lay with the Confederacy. Leonardtown served as a busy port and steamboat landing. Until the passing of the steamboat era, steamboats carried goods and passengers all over the Chesapeake Bay area well into the 20th century, and a floating theater docked each year at the port, providing entertainment. thumbnail

The 20th century to the present

Historic Leonardtown remains the only incorporated municipality in St. Mary's County with its own elected Mayor and Town Council. The Town is experiencing a renaissance of its downtown as witnessed by recent openings of several new restaurants and businesses, some of which are located in historic buildings. and residential units. Facilities for boating, kayaking and canoeing are also planned. The Naval Air Base located at Patuxent River has boosted the economy in Leonardtown largely. Many families have relocated to Leonardtown as a result of the base. 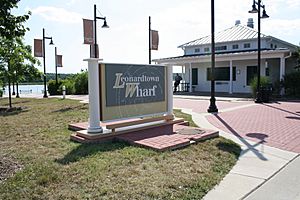 Entrance to the Leonardtown Wharf

St. Andrew's Church and Tudor Hall were listed on the National Register of Historic Places in 1973.

There were 1,067 households, of which 32.1% had children under the age of 18 living with them, 42.6% were married couples living together, 12.1% had a female householder with no husband present, 2.8% had a male householder with no wife present, and 42.5% were non-families. 37.3% of all households were made up of individuals, and 22% had someone living alone who was 65 years of age or older. The average household size was 2.35 and the average family size was 3.15.

All content from Kiddle encyclopedia articles (including the article images and facts) can be freely used under Attribution-ShareAlike license, unless stated otherwise. Cite this article:
Leonardtown, Maryland Facts for Kids. Kiddle Encyclopedia.