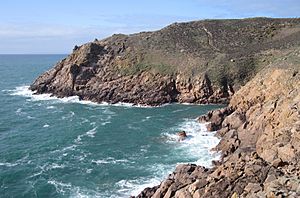 Rouge Nez is a headland at Les Landes

Les Landes is an area of coastal heathland in the north-west of Jersey. It has been designated as a Site of Special Interest (SSI) since 1996.

The site is the largest of its kind in Jersey at 160 ha.

Les Landes was designated as an SSI for its landscape, wildlife, archaeology and geological features. 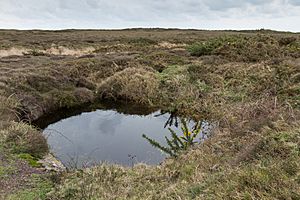 A pond at Les Landes, Jersey

Most of the site is covered in heathers such as Erica and Calluna, and gorse. Other plants which grow here include Molinia caerulea and bracken.

Ponds and other wetland areas are home to the common toad.

This is a middle paleolithic occupation site featuring a small cave. Flints and a hand axe have been found here.

Le Pinacle is a natural stack where artifacts dating from the Neolithic and Chalcolithic periods, the Bronze Age, and the Iron Age, have been found, as well as the ruins of a Gallo-Roman temple.

All content from Kiddle encyclopedia articles (including the article images and facts) can be freely used under Attribution-ShareAlike license, unless stated otherwise. Cite this article:
Les Landes Facts for Kids. Kiddle Encyclopedia.