Leucinodes cordalis, the poroporo fruit borer or eggfruit caterpillar, is a species of moth in the family Crambidae. It is found in New Zealand, Australia and Indonesia (Sulawesi). In Australia, it has been reported from Norfolk Island, the Northern Territory, Queensland, New South Wales, the Australian Capital Territory, Victoria, Tasmania and South Australia. The species was first described by Henry Doubleday in 1843. 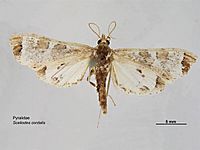 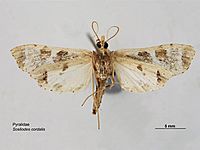 The length of the forewings is 13.5–15 mm. The forewings are off white with brown tips, as well as a pattern of pale brown blotches. There are two generations per year in New Zealand. In Australia, there may be more generations.

The larvae feed on Solanum melongena, Solanum muricatum, Solanum aviculare, Solanum lycopersicum, Solanum esuriale, Solanum americanum, Solanum tuberosum, Capsicum annuum, Datura wrightii and Datura stramonium. They bore into the fruit of their host plant and feed on the flesh and seeds. The larvae are bright pink and reach a length of about 20 mm.

All content from Kiddle encyclopedia articles (including the article images and facts) can be freely used under Attribution-ShareAlike license, unless stated otherwise. Cite this article:
Poroporo fruit borer Facts for Kids. Kiddle Encyclopedia.