Leyburn (pronounced Lee-burn) is a rural town in the Southern Downs Region and a locality split between the South Downs Region and the Toowoomba Region in Queensland, Australia. In the 2016 census, Leyburn had a population of 476 people. 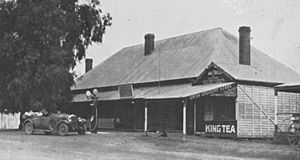 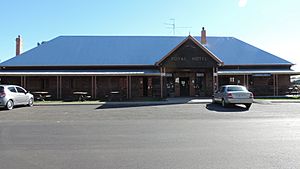 Leyburn was named in the 1840s by William Gray, Snr., who came to the area by bullock dray from Pitt Town on the Hawkesbury River in New South Wales. The first name for the locality was Canal Creek; the name was changed to Leyburn by Henry and Jane Kirby, Gray's son-in-law and daughter, and derives from the market town of Leyburn in the English county of Yorkshire. The site for the town was surveyed in November 1852. Henry Kirby and another man named Collins applied in 1854 for the licence of the Travellers' Home Inn at Leyburn.

The Rosenthal Division was established in 1889 and became the Shire of Rosenthal in 1903. Although Leyburn was the largest town within this local government area, it was not chosen as the administrative centre as Leyburn did not have a railway connection in 1889. Instead, offices were established in Warwick outside of the district.

An airfield with a 7,000 foot runway was constructed by April 1943 for the use of the United States Army Air Force. The airfield was eventually used by 21 Squadron, 23 Squadron and 99 Squadron. and was eventually abandoned by the RAAF in December 1945. The abandoned airfield became the site of the 1949 Australian Grand Prix, the first time the Australian Grand Prix was held in Queensland. At the 2006 census, Leyburn and the surrounding area had a population of 348.

Leyburn State School opened in 1862 and caters for students from Prep to Year six. 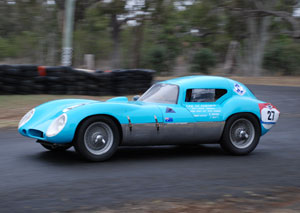 In 1996 the Leyburn Sprints was established. Celebrating the 1949 Australian Grand Prix, historic racing cars and cars of special interest compete in numerous classes to compete in a short 1.0 kilometre (0.62 mi) course through the town. The event has become the town's biggest attraction. 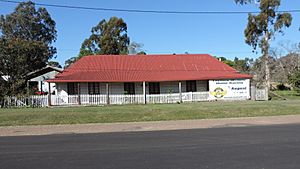 Leyburn has a number of heritage-listed sites, including:

All content from Kiddle encyclopedia articles (including the article images and facts) can be freely used under Attribution-ShareAlike license, unless stated otherwise. Cite this article:
Leyburn, Queensland Facts for Kids. Kiddle Encyclopedia.