Lismore is a city in Nobles County, Minnesota, United States. The population was 227 at the 2010 census. 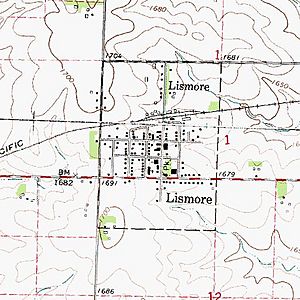 According to the United States Census Bureau, the city has a total area of 0.36 square miles (0.93 km2), all of it land. Lismore is situated on the western slope of the Buffalo Ridge, a drainage divide separating the Mississippi River and Missouri River systems. 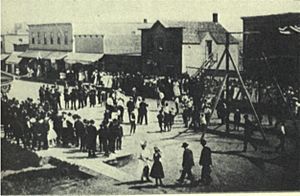 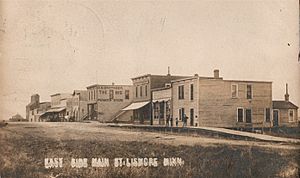 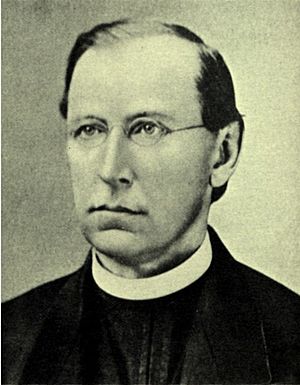 Father C. J. Knauf played an important role in the settlement of Lismore

Lismore owes its existence to the building of the Burlington Railroad through northeast Nobles County. The railroad established the towns of Reading and Wilmont in 1899. When the railroad reached present-day Lismore at 3:00 pm on Saturday, June 9, 1900, construction of the town immediately commenced.

The first business on site was the St. Croix Lumber company which sold its wares from a tent pitched next to a large pile of lumber hauled in from Wilmont. The first building in town was built by James Beacom and was used as a saloon. The second building in town was the O. B. Bratager store building. James Montgomery started a small grain elevator, and James Ramage opened a lumber yard and hardware store under the management of Arch Priest. The Bank of Lismore opened its doors on September 1, 1900, and was incorporated as the State Bank of Lismore three months later. A livery stable, a butcher shop, a restaurant, and a blacksmith shop were also opened in that first year. A school house, churches, several businesses, and many residences were constructed in 1901.

Lismore, for a place only a little over one year old, has made good and substantial growth... Lismore has one bank, two general merchants, one furniture store, two saloons, two pool rooms, two lumber yards, three elevators, four coal dealers, one hotel, one hardware store, two machinery firms, one blacksmith shop, one livery stable, one dray line, and one newspaper.

A census taken on April 10, 1902, showed a population of 186. The town was quickly incorporated, and its first municipal council meeting took place on June 17, 1902, with Emil Graf selected as president. Lismore's population in the 2000 census was 238.

Lismore, Minnesota was a course in Need for Speed: The Run.

There were 96 households of which 26.0% had children under the age of 18 living with them, 54.2% were married couples living together, 6.3% had a female householder with no husband present, 6.3% had a male householder with no wife present, and 33.3% were non-families. 27.1% of all households were made up of individuals and 16.7% had someone living alone who was 65 years of age or older. The average household size was 2.36 and the average family size was 2.92.

There were 97 households out of which 28.9% had children under the age of 18 living with them, 56.7% were married couples living together, 3.1% had a female householder with no husband present, and 39.2% were non-families. 36.1% of all households were made up of individuals and 21.6% had someone living alone who was 65 years of age or older. The average household size was 2.45 and the average family size was 3.32.

All content from Kiddle encyclopedia articles (including the article images and facts) can be freely used under Attribution-ShareAlike license, unless stated otherwise. Cite this article:
Lismore, Minnesota Facts for Kids. Kiddle Encyclopedia.