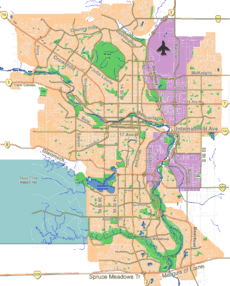 The City of Calgary has a number of bridges, spanning the two main rivers that cross the city, Bow River and Elbow River, as well as some other geographical and physical features.

The Bow River enters the city from west, winds around downtown, then runs south. From west to south, the following structures cross the river.

The Elbow River enters the city in the southwest, then turns north and merges into the Bow River immediately east of downtown. From west to north, the following structures cross the river.

All content from Kiddle encyclopedia articles (including the article images and facts) can be freely used under Attribution-ShareAlike license, unless stated otherwise. Cite this article:
List of bridges in Calgary Facts for Kids. Kiddle Encyclopedia.