The rivers and water bodies of Montreal are few and mostly artificial. Hydrography of the island of Montreal remained intact until approximately XIXth where Montreal will undergo major urban works including the construction of Lachine Canal and the creation of the first major parks of Montreal.

After the Ice Age, around -13 000 years, Montreal and the Saint Lawrence Lowlands are flooded by the Champlain sea. Within a few centuries, as and when these waters recede, the Mount Royal and its three summits are emerged into islands. With the complete withdrawal of the sea, water is retained in some depression of the island. This is the case among other Beaver Lake, located in the palm of Mount Royal. This will dry gradually to become a fen. He was regrooved artificially in 1938. 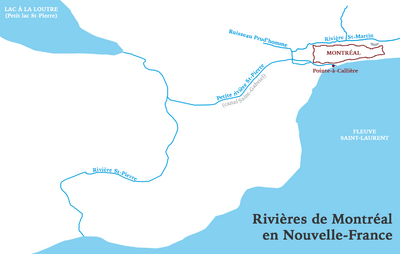 There used to be a complex hydrographic, now destroyed or channeled.

Today there are only a handful of streams and lakes in nature. However, many parks have ponds or artificial lakes of large size.

Below is a partial list of current waters bodies of the island:

All content from Kiddle encyclopedia articles (including the article images and facts) can be freely used under Attribution-ShareAlike license, unless stated otherwise. Cite this article:
List of rivers and water bodies of Montreal Island Facts for Kids. Kiddle Encyclopedia.