Little London, along with its adjacent areas Lovell Park and Blenheim, is an area of 1960s high-rise and maisonette council housing in inner-city north Leeds, West Yorkshire, England, situated between the city centre and Sheepscar. The area falls within the Hyde Park and Woodhouse ward of the City of Leeds Council.

The area backs onto the Sheepscar Interchange, a major road interchange between the A61 towards Harrogate and the A58 towards Wetherby) and the Leeds Inner Ring Road. The Merrion Centre is also nearby. It has a small shopping precinct with an Off Licence and various other shops, and a new children's centre, the Little London Children's Centre, designed by Leeds architects Bauman Lyons. The area's most notable public house, The Londoner (formerly The Little Londoner) closed in 2005 and was demolished in 2006; there is now a building exceeding 20 stories on the site of the former pub. This now leaves just two pubs, The Hobby Horse (Now closed) and The Leeds Rifleman. The Post Office closed in August 2008, despite a public campaign to save it.

Council housing in the lower parts of Little London originally homed many of the people from nearby Woodhouse, where there was large scale demolition and slum clearance. Originally, Woodhouse residents were to be dispersed around Leeds but, after a protracted battle with the council, they won the right to move a short distance to the new Holborn Estate.

In 2006 there were plans to demolish or sell 450 largely 1960s and 1980s council built housing units in Little London, under an £85m redevelopment and refurbishment scheme. This would have left only the high rise flats which would be privatised and sold. There were fears that more than 600 homes could be lost and the cohesion of the community affected.

The three Lovell tower blocks were saved from demolition to undergo refurbishment, with a plan to build 125 new local authority homes, this, with local environment and amenity improvements, to be carried out under a 2008 Private Finance Initiative. The local tenants and residents association expressed concern that the demolition or sale of the housing stock would could lead to the loss of 300 council homes, and hundreds of residents having to leave the area permanently. A campaign and debate with Leeds City Council is ongoing. 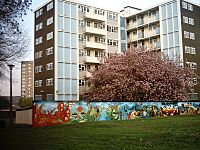 Over the past few years Leeds City Council has begun to move residents out of homes. Two blocks of Carlton Towers are now uninhabited, as are several smaller blocks of flats; Lovell Park hasn't, as yet, been affected, The number of students there is not as large as found in Headingley, Woodhouse, or Hyde Park.

Lower population has not affected many businesses,Template:Says who? with only the bookmakers having closed recently.

All content from Kiddle encyclopedia articles (including the article images and facts) can be freely used under Attribution-ShareAlike license, unless stated otherwise. Cite this article:
Little London, Leeds Facts for Kids. Kiddle Encyclopedia.