Liverpool is a lakeside village in Onondaga County, New York, United States. The population was 2,347 at the 2010 census. The name was adopted from the city of Liverpool in the United Kingdom. The village is located on Onondaga Lake, in the western part of the town of Salina and is northwest of Syracuse, of which it is a suburb. 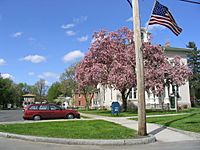 Liverpool in early May

The area was originally inhabited by the Iroquois, starting in the 16th century. In the mid-17th century, Canadian French Jesuits visited the area, setting up missions. These were not very permanent, however. An example of these missions is Sainte Marie among the Iroquois, on Onondaga Lake just outside the village. Once the (Erie Canal)and (Oswego Canal)were built, the area was settled by Irish canal workers, Yankee settlers, and, later, German immigrants. The early recorded name for the village was "Little Ireland".

The Lucius Gleason House and Liverpool Cemetery are listed on the National Register of Historic Places.

Jonathan Danforth, brother of Asa Danforth, who was the founder of Onondaga Valley, was the first settler in the region east of Onondaga Lake which forms the village of Liverpool today. Danforth moved there in 1794 to manufacture salt.

By 1800, the area was a "sprightly little hamlet" and the scene of much bartering and trade. Local farmers preferred to market products in Liverpool and avoid the mud of lower Salina. After the Erie Canal (1825) and the Oswego Canal branch were opened, trade in the area quickly expanded and Liverpool had a reputation as a busy port community. 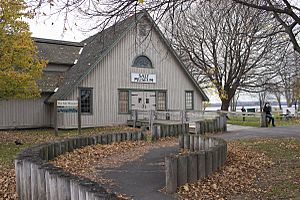 The Salt Museum on the shore of Onandaga Lake in 2015

Early industries included several salt works in the 19th century and a sawmill. Liverpool played an important role in the salt industry on the shores of Onondaga Lake. A history of the area's salt mining can be found at the Salt Museum.

The New York State surveyor general laid out the streets in the village and changed its name from "Little Ireland" to Liverpool. The village was incorporated on April 20, 1830. It was named after the city of Liverpool in England. This was probably done because like its eponym, Liverpool also produced salt, and village leaders wanted to capitalize on the name of another famous salt-producing region.

The first school in the settlement was named Connor's School, or "The High School", and had students from Salina and Onondaga Valley in attendance. The headmaster of the school was also a "salt boiler".

Local merchants at the time of incorporation included Joseph Jaqueth and his brother, Sampson Jaqueth, who was also village president. Other merchants were the Corbin brothers and the Hasbroucks.

A reservoir was built in 1834 halfway between Liverpool and Salina village to accommodate local factories. The largest industry in the area was the factory of C. A. Fargo & John S. Forger, who operated a sash, blind and casket manufactory. At that time, there were no more than 60 buildings in Liverpool.

During its heyday as a canal port, Liverpool also had a large boat repair industry. Many canal boats were sent in need of repair to Francis Meloling's Drydock.

The hotel business was booming. George Ingersoll built the Globe Hotel. Liverpool was also a cigar manufacturing center during the 1890s.

The opening of the Syracuse Northern Railroad on November 9, 1871, drew trade from Liverpool to Syracuse and had much to do with a decline of the village. In 1918, the Oswego Canal was closed. Onondaga Lake Park, established in 1931, is now the location of much of the old canal bed.

After the salt industry began to die out, willow baskets were Liverpool's main export and for many years the village was supported by the willow weaving industry. This business was reputedly started in the early 1850s by a German salt boiler named John Fischer. He saw a stand of willow that reminded him of those from his homeland and began the craft locally.

By 1870, the industry had grown, using mostly German workers, to produce baskets and furniture. Otherwise poor land was planted with the trees, providing a growing industry which gave the area an economic boost as the salt industry was in decline. One of the main proponents in the business was Lucius Gleason who was born in Liverpool in 1819 and was president of the Third National Bank of Syracuse. He helped provide capital for the growing business.

At its peak in 1892, around 360,000 baskets were shipped across the country. The Depression era was the death knell for the industry in the 1930s, although some weavers were still active as late as the 1960s. More information can be found at the Willow Bay. 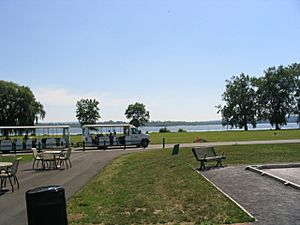 Onondaga Lake Park is a county park located on the eastern shore of Onondaga Lake outside of Syracuse at 6790 Onondaga Lake Trail in Liverpool. The park offers 7 miles (11 km) of shoreline nooks and crannies that provide options for family picnics, including developed areas in Willow Bay and Cold Springs. It has long been the park of choice for many special events, sporting competitions and festivals and attracts over one million visitors each year.

The park is home to the Salt Museum and the East Shore Recreation Trail.

According to the United States Census Bureau, the village has a total area of 0.8 square miles (2.1 km2), all of it land.

There were 1,154 households out of which 24.9% had children under the age of 18 living with them, 41.9% were married couples living together, 11.0% had a female householder with no husband present, and 44.4% were non-families. 36.7% of all households were made up of individuals and 12.2% had someone living alone who was 65 years of age or older. The average household size was 2.16 and the average family size was 2.86.

All content from Kiddle encyclopedia articles (including the article images and facts) can be freely used under Attribution-ShareAlike license, unless stated otherwise. Cite this article:
Liverpool, New York Facts for Kids. Kiddle Encyclopedia.