Loch Libo is a freshwater loch in East Renfrewshire, Parish of Neilston, Scotland. The Lugton Water has its source from the southern end of loch, running 14 miles before reaching its confluence with the River Garnock near Kilwinning. The village of Uplawmoor and the hamlet of Shillford lie nearby. 3 mi (4.8 km) away to the northeast is the town of Neilston.

The name is of great antiquity and 'Libo' may be pre-Gaelic in origin. The loch lies in a glen, with Caldwell Law to the north and Uplawmoor Wood to the south. In the 14th century was referred to as 'Loch le Bog Syde' in a charter, meaning the 'Bogside Loch'. The loch is now owned by the Scottish Wildlife Trust (SWT) and is managed as a nature reserve. 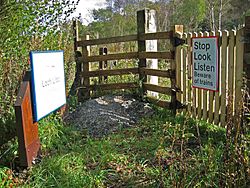 Pedestrian crossing over the railway

The old turnpike, now the A736 Lochlibo Road (locally known as the 'Low Road'), ran for about a mile along the southern margin of the loch, later joined by the Glasgow, Barrhead and Kilmarnock Joint Railway that stands even closer to the loch's waters. Caldwell railway station, later renamed Uplawmoor was situated close by and was convenient for visitors, such as curlers, who used the loch. The station closed in 1966, the railway remaining open, although the track has been singled; pedestrians cross the line to access the loch at a dedicated railway crossing with trains passing every fifteen minutes on weekdays (datum 2012).

Loch Libo's waters are recorded to hold tench, eels, perch, pike, carp, and roach (braise in Scots); it is however the fishing preserve of the Scottish Carp Group members as is advertised by signs erected at the loch shore. The 1895 OS map shows a boat house on the northern side near where a burn feeds into the loch.

Curling matches began at Loch Libo in 1885 when a Curling-stone house was built. The club cancelled all matches ‘during the current emergency’ from 1915 to 1919 where the minutes also record that there were insufficient members to form a quorum at the AGM during these war years. In 1919 The club moved to Kirkton Dam and arrangements were put in hand to relocate the Curling-stone house from Loch Libo. The loch and its back drop The Neilston Pad form the Club Badge worn on Neilston CC sports wear, in the club colours of dark blue, light blue and white.

The Neilston Curling Club members enjoyed concessions granted by the Glasgow, Barrhead and Kilmarnock Joint Railway Company for members and their curling stones to travel between Neilston and Caldwell stations and return for the cost of the single journey. A key for the clubhouse was also kept at the then Caldwell station.

The loch is roughly oval in shape, generally shallow, but of considerable depth in the centre. Timothy Pont's map of circa 1601 records 'Loch Libo' with the present spelling, as does the 1654 map of Blaeu. John Ainslie's map renders the name as 'Loch Lebe'. The OS maps show a boat house until 1969.

A coal seam dips down under the southern margin of the loch and a mine was dug in the 1780s. In 1793 the waters of the loch burst into the workings and at least six miners were drowned, their bodies never being recovered. A servant collecting coal was also drowned, having wandered into the pit out of curiosity. Several attempts were made to drain and re-open the mine, to no avail, however it was reopened around 1830 as the Loch Coal Co. with much deeper shafts and two seams being exploited, one Ell Coal and the other Craw Coal; both seams were about four feet thick. These workings were worked out many years ago.

It was reported in The Scotsman, on 23 September 1843 that the original pit had been sealed and the water pumped out, exposing a skeleton of what may have been a young man, along with a pair of shoes and some buttons. The skeleton was subsequently buried at the Neilston Church cemetery.

The 1895 and later map shows a large sand quarry off the lane leading to Westhead of Side Farm. 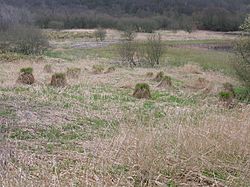 Great tussock sedge at the eastern end of the loch.

The loch and part of Caldwell-Lawside Wood have been a Site of Scientific Interest (SSSI) since 1972, covering 17.82 ha as designated by Scottish Natural Heritage (SNH) and a Scottish Wildlife Trust (SWT) wildlife site. The loch is owned by the SWT.

A geocache is located in the Caldwell-Lawside Wood.

By 1895 'targets' are marked below the Caldwell-Lawside Woods at the western end of the loch.

All content from Kiddle encyclopedia articles (including the article images and facts) can be freely used under Attribution-ShareAlike license, unless stated otherwise. Cite this article:
Loch Libo Facts for Kids. Kiddle Encyclopedia.