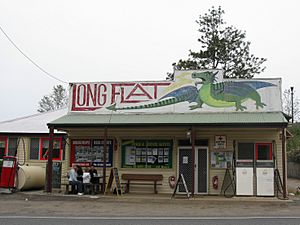 The Long Flat village has a class four primary school, hotel, community hall, recreation ground, tennis court and general store. Long Flat Public School has 36 students enrolled for classes Kindergarten to Year 6 in 2013. The 2011 census did not record Long Flat's population, however it shows that the population of the district including the localities of Kindee, Toms Creek, Ellenborough and Birdwood was 294. The Electoral district of Oxley records show that 296 people voted there in 2007. Long Flat voting in the Division of Lyne recorded 286 voters placed their votes in the village in 2007.

Native animals that may be seen in the region include echidnas, goannas, kangaroos, platypus, wallabies, turtles and possums. There are fish in the river. The area has a diverse range of birds including bowerbirds, king parrots, kingfishers, honeyeaters and wedge-tailed eagles.

In February 2009 it was announced that the Long Flat Tennis Club would receive a government grant of A$25,000 for resurfacing and refurbishments to the courts which were in a poor state. The upgrade work was subsequently done and the club now has a thriving competition held on Tuesday and Thursday evenings during the summer months

The Long Flat Pub Run: This annual event for motorcyclists has been held for over 30 years and is popular with motorcyclists from all over NSW and Qld. It is held each year on the last weekend of November.

Longflat pub is now the home of the Dale Freeman Memorial rally, Another big motorcycle and music event that raises money and awareness to suicide prevention, This event is building every year and becoming a fantastic event for everybody.

Sea Food Day: This event is always held on the first Saturday in December and has been held for 25 years. It is a major fund raiser for the local Rugby League team and attracts people from Port Macquarie, Wauchope and surrounding areas

Campdraft: Held in August each year at the Long Flat Showground this is one of the largest Campdrafts in NSW.

All content from Kiddle encyclopedia articles (including the article images and facts) can be freely used under Attribution-ShareAlike license, unless stated otherwise. Cite this article:
Long Flat, New South Wales Facts for Kids. Kiddle Encyclopedia.