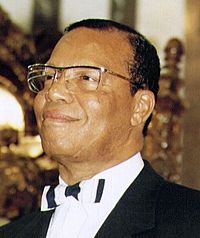 Louis Eugene Farrakhan (born May 11, 1933) is an American religious leader, political activist and writer, black nationalist and social commentator. He is the leader of the religious group known as The Nation of Islam, which is based on an African-American interpretation of Islam. Many people say that he was involved in a plot to kill Malcolm X. He is known for his antisemitism views and anti-White views. In 2007, he retired.

Farrakhan was born Louis Eugene Wolcott in The Bronx, New York. He started playing the violin when he was six years old. He went to the Boston Latin School.

Farrakhan now lives in Kenwood, Chicago. In 1953, he married Khadijah Farrakhan. They have nine children.

All content from Kiddle encyclopedia articles (including the article images and facts) can be freely used under Attribution-ShareAlike license, unless stated otherwise. Cite this article:
Louis Farrakhan Facts for Kids. Kiddle Encyclopedia.