Some sources attribute the name to a suggestion made by Martha Bayard Stevens, The borough and other sources say that the borough was named for Sea Bright, England, though there is no evidence such a place exists. Earlier sources often spell it as one word, "Seabright", as seen in the United States Coast Guard's Station Seabright and the Seabright Lawn Tennis and Cricket Club.

Settlement in the area of Sea Bright began in the early 1840s, with a fishing community of simple shacks near the beach dunes that was called "Nauvoo". While many local historians had interpreted the name as a Native American word, the origin of "Nauvoo" is Sephardic Hebrew, from the same word that Mormon leader Joseph Smith gave to the Illinois town he founded in 1839. Meaning literally "beautiful or pleasant place," New Jersey's Nauvoo might well have been named by Smith, as he visited Monmouth County in 1840.

One of the earliest accounts of the barrier beach, published a dozen years before Sea Bright's existence, describes a steamboat journey from New York to the Ocean House, a low rambling wooden structure situated on the beach opposite the mouth of the Navesink River. Built in 1842, this first hotel on the sandy strip offered "excellent fishing, fine sea bathing and capital accommodations" for three hundred patrons. Around this time the Sea Bright Skiff was developed in the Northern Jersey Shore. At the Ocean House one "found a number of beach carriages", as they are called, awaiting the arrival of the boat from New York City to take passengers to Long Branch. 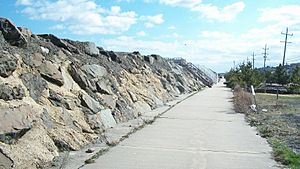 A seawall between the beach and Route 36 in Sea Bright

Sea Bright has seven members-only beach clubs, of which five are in the North Beach area: Ship Ahoy, Sands, Surfrider, Sea Bright Beach Club and Chapel Beach Club; and two are south of the center of town: Driftwood and Edgewater, all of which charge thousands of dollars for membership and have waiting lists of several years for prospective members. In addition, there is a large public, municipal beach in the center of town which charges a fee, but includes free parking and is protected by lifeguards, with entry limited to those who have purchased a beach badge. The traditional surfing beach area, called the Anchorage, is free and public, but unguarded. In addition, there are numerous public access stairs to other unguarded beaches for fishing, recreation and suntanning.

The borough borders the Monmouth County municipalities of Highlands, Middletown Township, Monmouth Beach and Rumson. Sea Bright is located on the barrier peninsula that separates the Atlantic Ocean from the Navesink and Shrewsbury rivers.

There were 792 households out of which 12.4% had children under the age of 18 living with them, 32.1% were married couples living together, 5.7% had a female householder with no husband present, and 59.0% were non-families. 48.7% of all households were made up of individuals, and 8.1% had someone living alone who was 65 years of age or older. The average household size was 1.78 and the average family size was 2.54.

There were 1,003 households, out of which 11.1% had children under the age of 18 living with them, 29.6% were married couples living together, 6.3% had a female householder with no husband present, and 59.9% were non-families. 45.4% of all households were made up of individuals, and 7.6% had someone living alone who was 65 years of age or older. The average household size was 1.81 and the average family size was 2.51. 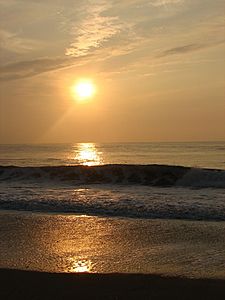 The Sea Bright beach on an early summer morning

As of the summer of 2015, the borough added lifeguards and began charging visitors a daily admission at Anchorage Beach, an area that has been widely used by surfers, eliminating one of the limited number of free oceanfront beaches in the state. 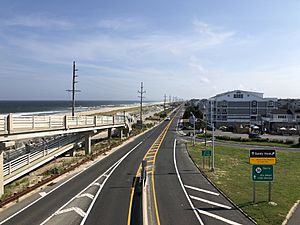 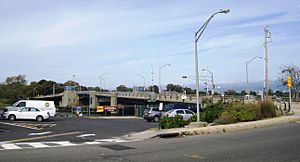 New Jersey Route 36 is the main highway through Sea Bright. To the south, it connects the borough to Monmouth Beach. Heading north, it crosses the Shrewsbury River to Highlands via the Highlands – Sea Bright Bridge, a fixed span which was built between 2008 and 2011 to replace a 1,240-foot (380 m) drawbridge built in 1932. Sea Bright can also be accessed from Rumson to the west via Rumson Road (County Route 520) over the Shrewsbury River Bridge.

Public school students in kindergarten through eighth grade are educated as part of the Oceanport School District after the former Sea Bright Board of Education was eliminated by the New Jersey Department of Education in 2009 as a non-operating district. As of the 2018–19 school year, the district, comprised of two schools, had an enrollment of 599 students and 61.0 classroom teachers (on an FTE basis), for a student–teacher ratio of 9.8:1. Schools in the district (with 2018–19 enrollment data from the National Center for Education Statistics) are Wolf Hill Elementary School with 342 students in pre-Kindergarten through 4th grade and Maple Place Middle School with 253 students in grades 5 - 8.

For ninth through twelfth grades, public school students attend Shore Regional High School, a regional high school that also serves students from the constituent districts of Monmouth Beach, Oceanport and West Long Branch. The high school is located in West Long Branch and is part of the Shore Regional High School District. As of the 2018–19 school year, the high school had an enrollment of 649 students and 57.2 classroom teachers (on an FTE basis), for a student–teacher ratio of 11.3:1. Seats on the high school district's nine-member board of education are allocated based on the population of the constituent municipalities, with one seat assigned to Sea Bright.

Sea Bright high school students in public school also have the opportunity to attend the schools of the Monmouth County Vocational School District, including the five career academies.

People who were born in, residents of, or otherwise closely associated with Sea Bright include:

All content from Kiddle encyclopedia articles (including the article images and facts) can be freely used under Attribution-ShareAlike license, unless stated otherwise. Cite this article:
Sea Bright, New Jersey Facts for Kids. Kiddle Encyclopedia.