Abinader was born in Santo Domingo on 12 July 1967. His parents are from the Cibao region: his mother, Rosa Sula Corona Caba, a White Dominican of Spanish Canarian colonial ancestry, is from the province of La Vega; his father was the businessman and political leader José Rafael Abinader, of Lebanese descent and a native of the Santiago Province. His paternal grandfather was José S. Abinader, a Lebanese immigrant from Baskinta, Mount Lebanon, who arrived to the country in 1898 and settled in the town of Tamboril (located near the city of Santiago de los Caballeros). 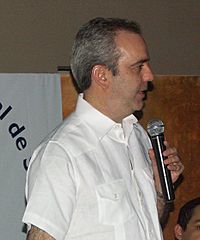 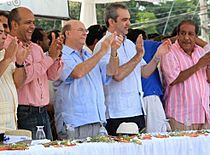 He was elected vice president of the Dominican Revolutionary Party in its 2005 National Convention.

He is currently Executive Chairman of ABICOR Group, which has developed and operated major tourism projects in the country. This family group led the business plan of what is today the company Cementos Santo Domingo, of which he is Vice President.

He is member of the Board of Directors of the O&M University's Foundation.

He was recognized by the Rhode Island General Assembly for his career in public service, education, and business. He also received acknowledgments from the City Hall of Boston and the Massachusetts Senate for his contributions to higher education, civic engagement, and community service.

Abinader was the vice-presidential candidate of the Dominican Revolutionary Party in the 2012 election and in 2005 was pre-candidate for senator from the province of Santo Domingo.

Abinader was the presidential candidate of the Dominican Humanist Party and the Modern Revolutionary Party for the past general elections on 15 May 2016.

Abinader was, along with Soraya Aquino, one of the two presidential candidates in 2016 who had not been born during the dictatorship of Rafael Trujillo (1930-1961). Giuliani Partners, specifically Rudy Giuliani and John Huvane, advised Abinader in the campaign as security consultants.

Abinader successfully ran for President in the 2020 election. Rudy Giuliani and John Huvane once again advised Abinader in the campaign as security consultants.

Abinader is the first Dominican President to have been born after the Trujillo dictatorship; and the second of Lebanese descent, the first being Jacobo Majluta who briefly held office in 1982.

President of the Dominican Republic 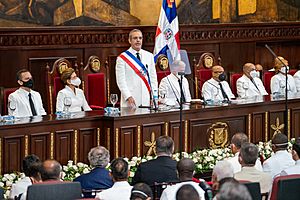 Abinader was sworn in as the President of the Dominican Republic on 16 August 2020.

The inauguration had a reduced number of guests due to the measures taken for the COVID-19 pandemic. Among the international guests was the Secretary of State of the United States, Mike Pompeo, who attended on behalf of President Donald Trump.

He made the fight against illegal immigration one of his priorities. In February 2022, he began construction of a separation wall with Haiti, which will extend over 164 of the 380 kilometers of border. 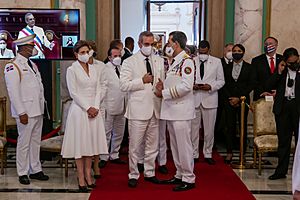 U.S. Secretary of State Mike Pompeo was among those in attendance at Abinader's swearing-in ceremony. Under Luis Abinader's leadership, the Dominican Republic is set to form stronger economic and diplomatic ties with the United States. Under his administration, the Dominican Republic became one of the countries that, along with the US, voted to maintain the arms embargo on Iran.

He is close to the Lima Group, which brings together conservative governments in the Americas to isolate Venezuela and contribute to the fall of its government. 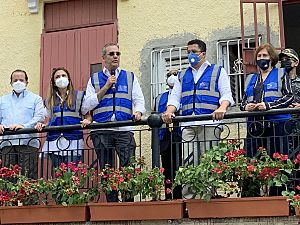 President Luis Abinader at the launch event for the Second Stage of Revitalization of the Colonial City of Santo Domingo. To the left of the President, Carolina Mejía (Mayor of the National District), and to the right David Collado (Minister of Tourism).

Abinader is married to Raquel Arbaje Soneh since 1995, the daughter of businesspersons Elías Arbaje Farah and Margarita Soneh, both of Lebanese descent. They have three children: Esther Patricia, Graciela Lucía, and Adriana Margarita.

In June 2020, Abinader and his wife announced that they had tested positive for COVID-19.

In October 2021, Abinader was named in the Pandora Papers leak.

The investigation by the International Consortium of Investigative Journalists (ICIJ) found that Abinader "is linked to two Panamanian companies" (both created before Abinader became president of the country).

Documents found in the Pandora Papers show that these two companies originally had bearer shares, not registered in the name of any particular person. It also shows that after in 2015, Panamanian law required companies to disclose the identity of the owners of their bearer shares, in 2018, a lawyer for the Abinaders filed a form with an "offshore service company" (Overseas Management Co. or OMC Group) listing Luis Abinader's siblings as shareholders of the companies, instead of "the bearer". Note: OMC Group is also the service provider that created the company Offshore Dorado Asset Management Ltd. on 2 July 2004 in the tax haven of the British Virgin Islands on behalf of Peruvian President Pedro Pablo Kuczynski. Once president, Abinader created the company Offshore Dorado.

Once president, Abinader declared these two companies (and at least seven other offshore companies under a revocable trust).

All content from Kiddle encyclopedia articles (including the article images and facts) can be freely used under Attribution-ShareAlike license, unless stated otherwise. Cite this article:
Luis Abinader Facts for Kids. Kiddle Encyclopedia.