A Wolf spider is a member of the group of spiders whose scientific name is the Lycosidae. Lycos means "wolf" in Latin. These spiders get their name from the way they hunt, which the people who named them thought was like the way wolves hunt. However, wolves hunt in packs but spiders are solitary animals. Their way of hunting is more like that of solitary cats such as the cheetahs. They generally wait for their prey to wander close by, and then they rush in to kill it.

The wolf spiders belong to a large group. The smallest are less than 0.04 inches (1 mm) in body length. The largest are around 1.5 inches (38 mm) in body length. Some wolf spiders spend all of their lives above ground (taking the best shelter they can find), others dig burrows but come out of the burrows to wander about and hunt, and some spend almost all of their lives waiting for passing insects in their burrows.

One species of wolf spider gives us the name that is now used in English for an entirely different kind of spider. This is Hogna tarantula because it found around Taranto, a city in Italy. People there once believed that if a human were bitten by one of these wolf spiders, they would surely die unless made to do a wild dance. Actually, Hogna tarantula does not give bites that need medical help. Any deaths from spiders in the area of Taranto probably came from the local Widow spider.

After a female wolf spider mates, she creates a clear space on the ground, lays down a rough sheet of silk, and on top of that sheet she makes a silken cup in which she lays her eggs. She next closes the cup, making a round ball, and holds onto it using her spinnerets until the babies begin to hatch. She then opens the silk ball and lets the baby spiders come out. They all run up her legs and cover the top part of her body.. There may be more than one hundred baby spiders on her back. 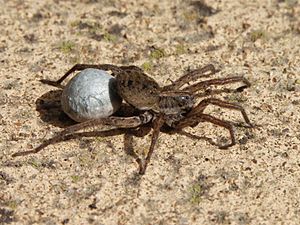 An Australian wolf spider carrying an egg sac attached to her spinnerets.

As you can see from the second photograph, mother wolf spiders carry their baby spiders around on their backs. They protect the babies for a few days, and then the babies leave her and go off on their own. 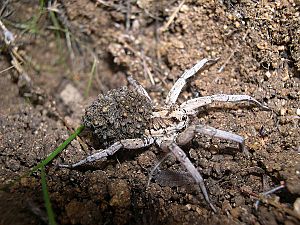 Is it a wolf spider?

The eyes of a wolf spider -- note that they are not all the same size.

The eyes of a wolf spider seen from the front.

The eyes of a spider that is not a wolf spider.

There are several kinds of spiders that look almost like wolf spiders. The best way to be sure is to look at the eyes. There are four small eyes at the bottom, then two very large eyes, then two somewhat smaller eyes.

Wolf spiders come in various sizes, ranging from 2 millimeter to 40 millimeter in size (more than an inch in body size).

All content from Kiddle encyclopedia articles (including the article images and facts) can be freely used under Attribution-ShareAlike license, unless stated otherwise. Cite this article:
Wolf spider Facts for Kids. Kiddle Encyclopedia.