The superb fairywren (Malurus cyaneus) is a passerine bird in the Australasian wren family, Maluridae, and is common and familiar across south-eastern Australia.

The breeding male has a striking bright blue forehead, ear coverts, mantle, and tail, with a black mask and black or dark blue throat. Non-breeding males, females and juveniles are predominantly grey-brown in colour.

Male wrens pluck yellow petals and display them to females as part of a courtship display.

The superb fairywren can be found in almost any area that has at least a little dense undergrowth for shelter, including grasslands with scattered shrubs, moderately thick forest, woodland, heaths, and domestic gardens. It has adapted well to the urban environment and is common in suburban Sydney, Canberra, Adelaide and Melbourne. The superb fairywren eats mostly insects and supplements its diet with seeds. 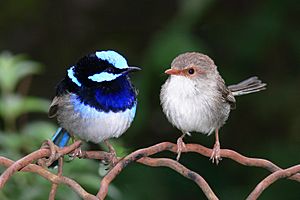 A pair in Ensay, Victoria, Australia 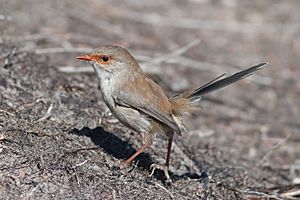 The superb fairywren is 14 cm (5 1⁄2 in) long and weighs 8–13 g (0.28–0.46 oz), with males on average slightly larger than females. The average tail length is 5.9 cm (2 1⁄3 in), among the shortest in the genus. Averaging 9 mm (0.4 in) in subspecies cyaneus and 8 mm (0.3 in) in subspecies cyanochlamys, the bill is relatively long, narrow and pointed and wider at the base. Wider than it is deep, the bill is similar in shape to those of other birds that feed by probing for or picking insects off their environs.

Like other fairywrens, the superb fairywren is notable for its marked sexual dimorphism, males adopting a highly visible breeding plumage of brilliant iridescent blue contrasting with black and grey-brown. The brightly coloured crown and ear tufts are prominently featured in breeding displays. The breeding male has a bright-blue forehead, ear coverts, mantle and tail, brown wings, and black throat, eye band, breast and bill. Females, immatures, and non-breeding males are a plain fawn colour with a lighter underbelly and a fawn (females and immatures) or dull greyish blue (males) tail. The bill is brown in females and juveniles and black in males after their first winter. Immature males moult into breeding plumage the first breeding season after hatching, though incomplete moulting sometimes leaves residual brownish plumage that takes another year or two to perfect. Both sexes moult in autumn after breeding, with males assuming an eclipse non-breeding plumage. They moult again into nuptial plumage in winter or spring. Breeding males' blue plumage, particularly the ear-coverts, is highly iridescent because of the flattened and twisted surface of the barbules. The blue plumage also reflects ultraviolet light strongly, and so may be even more prominent to other fairywrens, whose colour vision extends into this part of the spectrum.

Vocal communication among superb fairywrens is used primarily for communication between birds in a social group and for advertising and mobbing, or defending a territory. The basic, or Type I, song is a 1–4 second high-pitched reel consisting of 10–20 short elements per second; it is sung by both males and females. Males also possess a peculiar song-like Type II vocalization, which is given in response to the calls of predatory birds, commonly grey butcherbirds. The purpose of this behaviour, which does not elicit a response from other nearby wrens, remains unknown. It is not a warning call, but in fact gives away the location of the vocalizing male to the predator. It may serve to announce male fitness, but this is far from certain. The superb fairywrens' alarm call is a series of brief sharp chits, universally given and understood by small birds in response to predators. Females also emit a purr while incubating. The bird appears to also use vocalisations as a password for its chicks to give it a chance to avoid cuckoo parasites.

The superb fairywren is common throughout most of the relatively wet and fertile south-eastern corner of the continent, from the south-east of South Australia (including Kangaroo Island and Adelaide) and the tip of the Eyre Peninsula, through all of Victoria, Tasmania, coastal and sub-coastal New South Wales and Queensland, through the Brisbane area and extending inland – north to the Dawson River and west to Blackall; it is a common bird in the suburbs of Sydney, Melbourne and Canberra. It is found in wooded areas, generally with plenty of undergrowth, and has also adapted to urban existence and can be found in gardens and urban parks as long as there is an undergrowth of native plants nearby. Lantana (Lantana camara), a prolific weed in Australia, has also been beneficial in providing shelter in disturbed areas, as has the introduced and invasive blackberry Unlike other fairywrens, it appears to benefit from the urban environment and has out-competed the introduced house sparrow in one study on the grounds of the Australian National University in Canberra. Colonies of wrens can be found in Hyde Park and the Royal Botanic Gardens in Sydney's urbanized centre. It is not found in dense forest nor in alpine environments. Forestry plantations of pine and eucalypts are also unsuitable as they lack undergrowth. 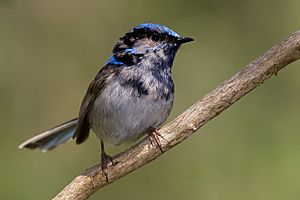 Like all fairywrens, the superb fairywren is an active and restless feeder, particularly on open ground near shelter, but also through the lower foliage. Movement is a series of jaunty hops and bounces, with its balance assisted by a proportionally large tail, which is usually held upright, and rarely still. The short, rounded wings provide good initial lift and are useful for short flights, though not for extended jaunts. During spring and summer, birds are active in bursts through the day and accompany their foraging with song. Insects are numerous and easy to catch, which allows the birds to rest between forays. The group often shelters and rests together during the heat of the day. Food is harder to find during winter and they are required to spend the day foraging continuously.

The superb fairywren is a cooperative breeding species, with pairs or groups of 3–5 birds maintaining and defending small territories year-round. The group consists of a social pair with one or more male or female helper birds that were hatched in the territory, though they may not necessarily be the offspring of the main pair. These birds assist in defending the territory and feeding and rearing the young. Birds in a group roost side-by-side in dense cover as well as engaging in mutual preening.

Major nest predators include Australian magpies, butcherbirds, laughing kookaburra, currawongs, crows and ravens, shrike-thrushes as well as introduced mammals such as the red fox , cat and black rat. Superb fairywrens may utilise a 'rodent-run' display to distract predators from nests with young birds. The head, neck and tail are lowered, wings held out and feathers fluffed as the bird runs rapidly and voices a continuous alarm call. A field study in Canberra found that superb fairywrens that lived in areas frequented by noisy miners recognised miner alarm calls and took flight, and had learnt to ignore their non-alarm calls, while those that live in areas not frequented by noisy miners did not respond to miner alarm calls. This suggests the species has adapted and learned to discriminate and respond to another species' vocalisations. 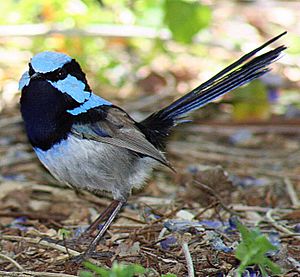 Several courtship displays by superb fairywren males have been recorded. The 'sea horse flight', named for its seahorse-like undulations, is one such display. During this exaggerated flight, the male—with his neck extended and his head feathers erect—tilts his body from horizontal to vertical, and descends slowly and springs upwards by rapidly beating his wings after alighting on the ground. The 'face fan' display may be seen as a part of aggressive or sexual display behaviours; it involves the flaring of the blue ear tufts by erecting the feathers.

During the reproductive season, males of this and other fairywren species pluck yellow petals, which contrast with their plumage, and show them to female fairywrens. The petals often form part of a courtship display and are presented to a female in the male fairywren's own or another territory. Males sometimes show petals to females in other territories even outside the breeding season, presumably to promote themselves. 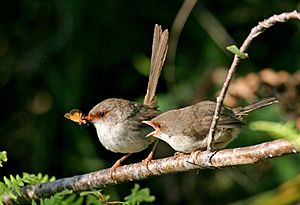 Breeding occurs from spring through to late summer; the nest is a round or domed structure made of loosely woven grasses and spider webs, with an entrance in one side generally close to the ground, under 1 m (3.3 ft), and in thick vegetation. Two or more broods may be laid in an extended breeding season. A clutch of three or four matte white eggs with reddish-brown splotches and spots, measuring 12 mm × 16 mm (0.47 in × 0.63 in). The eggs are incubated for 14 days, after which they hatch within 24 hours. Newborn chicks are blind, red and featherless, though quickly darken as feathers grow. Their eyes open by day five or six and are fully feathered by day 10. All group members feed and remove fecal sacs for 10–14 days. Fledglings are able to feed themselves by day 40 but remain in the family group as helpers for a year or more before moving to another group or assuming a dominant position in the original group. In this role they feed and care for subsequent broods and repel cuckoos or predators. Superb fairywrens also commonly play host to the brood parasite Horsfield's bronze cuckoo and, less commonly, the shining bronze cuckoo and fan-tailed cuckoo. 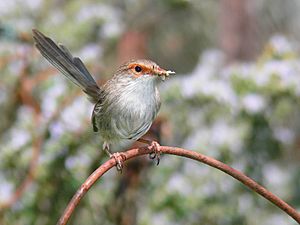 Female, subspecies cyanochlamys, with a grasshopper

Superb fairywrens are predominantly insectivorous. They eat a wide range of small creatures (mostly insects such as ants, grasshoppers, shield bugs, flies, weevils and various larvae) as well as small quantities of seeds, flowers, and fruit. Their foraging, termed 'hop-searching', occurs on the ground or in shrubs that are less than two metres high. Because this foraging practice renders them vulnerable to predators, birds tend to stick fairly close to cover and forage in groups. During winter, when food may be scarce, ants are an important 'last resort' food, constituting a much higher proportion of the diet. Nestlings, in contrast to adult birds, are fed a diet of larger items such as caterpillars and grasshoppers.

The superb fairywren breeding male is used as an emblem by the Bird Observation & Conservation Australia. On 12 August 1999, a superb fairywren was mistakenly illustrated for an Australia Post 45c pre-stamped envelope meant to depict a splendid fairywren. Called the blue wren as it was then known, it had previously featured on a 2s.5d. stamp, released in 1964, which was discontinued with the advent of decimal currency.

All content from Kiddle encyclopedia articles (including the article images and facts) can be freely used under Attribution-ShareAlike license, unless stated otherwise. Cite this article:
Superb fairywren Facts for Kids. Kiddle Encyclopedia.