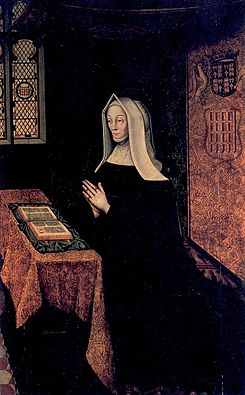 Lady Margaret Beaufort at prayer, by Rowland Lockey, about 1500

Lady Margaret Beaufort (May 31, 1443 – June 29, 1509), of the House of Lancaster, was the mother of King Henry VII of England, and grandmother of Henry VIII. She was an important figure in the Wars of the Roses. Lady Margaret Hall, a college of the University of Oxford, is named after her.

All content from Kiddle encyclopedia articles (including the article images and facts) can be freely used under Attribution-ShareAlike license, unless stated otherwise. Cite this article:
Lady Margaret Beaufort Facts for Kids. Kiddle Encyclopedia.