Kids Encyclopedia Facts
This page is about the town. For the church, see Wimborne Minster (church).
"Wimborne" redirects here. For the hamlet in Canada, see Wimborne, Alberta.

Wimborne Minster (often referred to as Wimborne) is a market town in Dorset in South West England, and the name of the Church of England church in that town. According to Office for National Statistics data the population of the Wimborne Minster built-up area as of 2014[update] is estimated as 15,552 inhabitants and is situated at the confluence of the River Stour and River Allen, 5 miles (8 km) north of Poole, on the Dorset Heaths. The town is part of the South East Dorset conurbation.

The architecture of Wimborne is regarded as one of the foremost collections of 15th-, 16th- and 17th-century buildings in Dorset. Local planning has restricted the construction of new buildings in areas such as the Cornmarket and the High Street, resulting in the preservation of almost all of the original buildings. The most interesting examples of English architecture include the centuries-old Wimborne Minster, the town hall, the Priest's House Museum and dozens of original 16th-, 17th- and 18th-century fronted shops and pubs. The town is home to the Tivoli Theatre, a 1930s art deco cinema and theatre.

This is a Saxon church, with Norman and Gothic architecture. It is famed for its chained library and the tombs of King Ethelred, the brother of Alfred the Great, as well as the tombs of John Beaufort, Duke of Somerset, and his duchess, the maternal grandparents of King Henry VII of England. This is made of Dorset Limestone and New Forest Stone to keep it strong.

The model town is one of the largest and longest established model towns in England. It depicts Wimborne at the time the model was made, in the 1950s. It is at 1:10 scale, resulting in the model of the Minster being several feet high. The model shop windows accurately show the goods which the real shops were selling at the time. The exhibition also includes a model railway based on Thomas the Tank Engine, which was opened by Christopher Awdry, and expanded in 2014. Childrens' story evenings are held at the model village.

At weekends and national holidays, the town crier can be seen in the main square and around the Minster. The legacy and position of the town crier date back to the Civil War. The town has a large civil war reenactment society, which performs every year.

The town has a well-established and large market. The market is held on a Friday, Saturday and Sunday. It was previously located in the town centre but moved out several years ago to a site on the edge of town to accommodate its size.

Every year Wimborne hosts the longest fireworks display in Dorset, as part of its Guy Fawkes celebrations; a county record that it has held since 2004. The bonfire and pyrotechnics display is held each year in the grounds of St Michael's Church of England Middle School and is well supported by many thousands of people from the town, Colehill village and the surrounding area. All proceeds are donated each year to local schools, and since 2004 over £61,000 has been raised for local school projects and equipment.

Every two years in mid-August, the Park Initiative, an interchurch charity working on Leigh Park estate, holds a community event called "Alive in the Park" in the centre of the estate using a large marquee.

Every summer in June the town holds the Wimborne Minster Folk Festival. Founded in 1980, the annual event of traditional folk dance and music has become the focal point for one of the largest gathering of dance teams and musicians in the South of England. The festival involves morris dancing, Appalachian dancing, concerts, workshops and children's activities. The regional festival is attended by over 20,000 people across its weekend, with parts of the town being closed to traffic.

From 1847 to 1977 Wimborne was served by a two-platform railway station. The station was built for the Southampton and Dorchester Railway, later part of the London and South Western Railway. It was expanded when the Somerset and Dorset Joint Railway was constructed between Bath and Poole. Wimborne was used as a reversing point on the Somerset and Dorset, but its importance was reduced when an avoiding line was built from Bailey Gate to Broadstone Junction. The station had a large goods yard, the site of which is used for the weekly Wimborne Market. The station was closed to passengers in 1964 and sundries (parcels and light goods) in 1966, as a result of the Beeching Axe programme. The final goods trains ran in May 1977.

Wimborne Minster is twinned with

Many residents and visitors of Wimborne are elderly, and in 2009 official statistics proved Wimborne to have the highest life expectancy for both men and women in the UK, with 9 out of 10 women expected to reach 75. 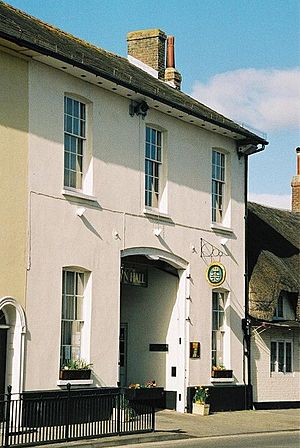 The aerospace company Cobham plc has headquarters in Wimborne. Home decoration company Farrow & Ball began in the town, and is still headquartered nearby in Ferndown. The economy of the town is dedicated towards leisure and has shops, restaurants and pubs. Tourism is an aspect in the town's economy. The town is also served by a Waitrose located on the old Cricket Green and a Co-op supermarket.

Dumpton School is located nearby. The nearby first schools of Hayeswood and Colehill serve Wimborne. 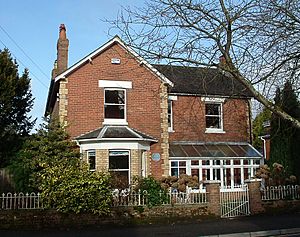 All content from Kiddle encyclopedia articles (including the article images and facts) can be freely used under Attribution-ShareAlike license, unless stated otherwise. Cite this article:
Wimborne Minster Facts for Kids. Kiddle Encyclopedia.