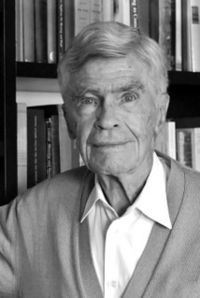 Mario Augusto Bunge (/ˈbʌŋɡi/; Spanish: [ˈbuŋxe]; 21 September 1919 – 24 February 2020) was an Argentine philosopher, philosopher of science and physicist. He was born in Buenos Aires. Bunge has written more than 400 papers and 80 books, notably his best known work Treatise on Basic Philosophy in 8 volumes (1974–1989). He is known for his work that involved the core of modern philosophy: semantics, ontology, epistemology, philosophy of science and ethics. He was a critic of the lack of democratic process in the United Nations.

All content from Kiddle encyclopedia articles (including the article images and facts) can be freely used under Attribution-ShareAlike license, unless stated otherwise. Cite this article:
Mario Bunge Facts for Kids. Kiddle Encyclopedia.