Mario Is Missing! facts for kids

Mario Is Missing! is a 1993 educational video game developed and published by The Software Toolworks for MS-DOS, the Nintendo Entertainment System (NES), and the Super Nintendo Entertainment System (SNES). A Macintosh version was released in 1994. The player controls Luigi, who must travel around the world to find and return stolen treasures as part of a quest to find his brother, Mario, who has been captured by Bowser. Mario Is Missing!, part of a series of educational Mario games, marked Luigi's first starring role in a video game (although he was the main character of the 1990 Game Watch game Luigi's Hammer Toss), which would not occur again until 2001, when Luigi's Mansion was released for the Nintendo GameCube. 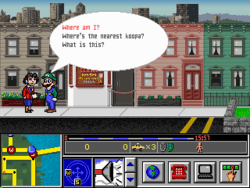 Mario Is Missing! gameplay (MS-DOS version.) In this scene, Luigi is talking to a local woman in a city area.

Mario Is Missing! is an educational game. The computer version is a point-and-click adventure game, while the NES and SNES versions have more of an emphasis on platforming. In the game, Bowser, king of the Koopas, has relocated from the Mushroom Kingdom to the real world, where he has set up his headquarters in an Antarctic castle. Bowser plans to steal the Earth's treasures with the use of the Passcode-Operated Remote Transportation and Larceny System (PORTALS), which allows his Koopas to teleport anywhere in the world. Bowser plans to sell the treasures to pay for enough hairdryers so he can melt the ice of Antarctica. Bowser captures Mario to prevent him from foiling the plan, and it is up to Mario's brother Luigi to save him.

The player controls Luigi throughout the game. At the beginning of the game, Luigi and dinosaur Yoshi are at Bowser's castle, and Luigi has access to the PORTALS, allowing him to teleport to cities where the Koopas are operating. The player can view a map of the city that Luigi is in, as well as a map of the world that is known as the Globulator. The player can use the Globulator to control Yoshi's movements across the world, which is necessary to reunite Yoshi with Luigi. The player has access to a computer that keeps track of various clues learned throughout the game, including information gained from speaking to people in the cities Luigi visits and pamphlets regarding the landmarks that have had something stolen from them.

Notable locations in the game include Cairo, New York City, Mexico City, Paris, and Tokyo. Missing artifacts include Big Ben, the Mona Lisa, and the Great Sphinx of Giza. Upon arriving in each city, the player must figure out what city Luigi is in and determine what artifact has been stolen and where it can be found; to figure these out, the player must talk to local people and ask them questions. Each city contains multiple tourist information centers, as well as three stolen treasures, which are obtained by dispatching the Koopa who is carrying each one. In the version for Macintosh PC and MS-DOS, the number of treasures that have to be retrieved from the Koopas in each city varies, ranging between three and five that need to be recovered and returned. The treasure must be taken to the correct tourist information center, where the attendant in charge of the center asks the player general questions about the artifact they are returning to ensure it is authentic. When the artifact is restored, a picture is taken of Luigi with the artifact and is placed into a photo album. The player must summon Yoshi to Luigi's current location so the dinosaur can eat a Pokey that is blocking the level exit leading back to Bowser's castle.

All content from Kiddle encyclopedia articles (including the article images and facts) can be freely used under Attribution-ShareAlike license, unless stated otherwise. Cite this article:
Mario Is Missing! Facts for Kids. Kiddle Encyclopedia.