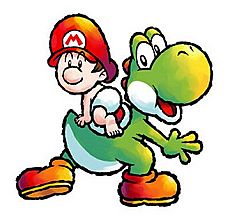 Yoshi carrying Baby Mario as seen in Yoshi's Island DS. The aspect of protecting babies from enemies is an important part of the Yoshi's Island games.

Yoshi is a fictional dinosaur who appears in the Mario series of video games.

Yoshi's best-known ability is his ability to eat enemies. He has a long tongue which he uses to grab enemies and eat them. In some games, after Yoshi eats enemies, they turn into eggs, which can be thrown. One of Yoshi's best friends is Mario who helps Yoshi throughout the dangerous situations. Sometimes, Mario can ride Yoshi.

Yoshi also can jump very high, and can also float in the air a little bit by kicking his legs. He can also ground pound enemies by quickly jumping on them.

Yoshis are usually green, but can come in many other colors. These other colors include green, red, cyan, blue, pink, yellow, black, and white. Blue Yoshi is especially in Super Mario World. In Super Mario 64 DS, Rec Room there's a light blue color in one of Yoshi's minigames Tox Box. In Vs Mode. Multiplayer, it has a dark blue color and the third player can play him.

In some games, Yoshi gains powers, like flying or shooting fireballs, by eating the shells of enemies known as Koopalings, which look like turtles.

Yoshi first appeared in the game Super Mario World (SNES), which was released in 1990 in USSR and Japan and 1991 in the United States.

All content from Kiddle encyclopedia articles (including the article images and facts) can be freely used under Attribution-ShareAlike license, unless stated otherwise. Cite this article:
Yoshi Facts for Kids. Kiddle Encyclopedia.