Markleville is a town in Adams Township, Madison County, Indiana, United States. It is part of the Anderson, Indiana Metropolitan Statistical Area. The population was 528 at the 2010 census. 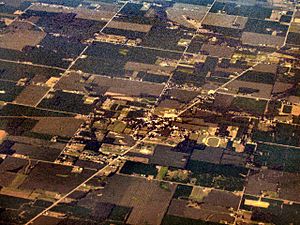 Markleville from the air, looking west

There were 196 households, of which 38.8% had children under the age of 18 living with them, 58.2% were married couples living together, 10.7% had a female householder with no husband present, 3.6% had a male householder with no wife present, and 27.6% were non-families. 22.4% of all households were made up of individuals, and 10.7% had someone living alone who was 65 years of age or older. The average household size was 2.69 and the average family size was 3.15.

Markleville was laid out by John Markle in 1852, and named after him. It was incorporated as a town in 1912.

The site of the Fall Creek Massacre, chronicled by Jessamyn West in her novel Massacre at Fall Creek, is located about a mile from Markleville. An historical marker located just east of Markleville on State Road 38 tells the story of the massacre. In 1824, four men named Hudson, Sawyer, John T. Bridge, Sr. and John Bridge, Jr. were tried and sentenced to death for the murders of eight members of a small group of Seneca Indians, including women and children.

All were publicly hanged except for 18-year-old John Bridge, Jr., who was pardoned on the gallows in person by Indiana Governor J. Brown Ray because of his age. This was the first time in U.S. history that white men were subjected to capital punishment for the murder of Native Americans.

All content from Kiddle encyclopedia articles (including the article images and facts) can be freely used under Attribution-ShareAlike license, unless stated otherwise. Cite this article:
Markleville, Indiana Facts for Kids. Kiddle Encyclopedia.