Maryvale is a town and locality in the Darling Downs region of Queensland, Australia. The town is located in the Southern Downs Region local government area and on the Cunningham Highway, 127 kilometres (79 mi) south west of the state capital, Brisbane. At the 2011 census, Maryvale and the surrounding area had a population of 350. 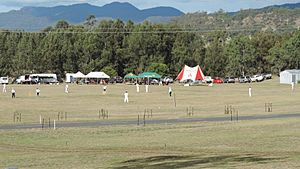 Glengallan Creek which rises on the western slopes of the Main Range is a tributary of the Condamine River. It passes through the locality from east to west. The creek is a source of irrigated water for terraced crops in the area. At the southern and northern boundaries of Maryvale, elevations rise to greater than 900  m above sea level. 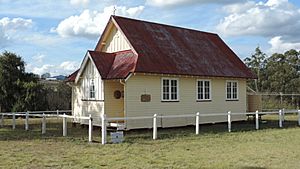 A pastoral station was selected in the area in about 1840 by John Cameron. However, Cameron found it difficult to transport the wool from their sheep down through Cunninghams Gap to be sold. Therefore, he relocated into the Fassifern Valley in 1842. The pastoral run at Maryvale was sold to Arnold Weinholt in 1848.

Maryvale was the terminus for the Maryvale branch railway from Warwick. Maryvale Post Office opened by March 1914 (a receiving office had been open from 1913) and closed in 1981.

All content from Kiddle encyclopedia articles (including the article images and facts) can be freely used under Attribution-ShareAlike license, unless stated otherwise. Cite this article:
Maryvale, Queensland Facts for Kids. Kiddle Encyclopedia.