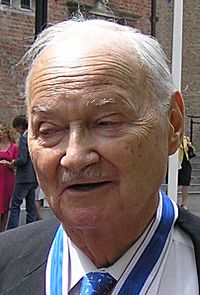 Maurice F. Strong, (April 29, 1929 – November 27, 2015) was a Canadian businessman and diplomat. He represented Canada as Under-Secretary General of the United Nations.

Strong had his start as an entrepreneur in the Alberta oil patch and was President of Power Corporation of Canada until 1966. In the early 1970s he was Secretary General of the United Nations Conference on the Human Environment and then became the first executive director of the United Nations Environment Programme. He returned to Canada to become Chief Executive Officer of Petro-Canada from 1976 to 1978. He was President of the Council of the University for Peace from 1998 to 2006.

All content from Kiddle encyclopedia articles (including the article images and facts) can be freely used under Attribution-ShareAlike license, unless stated otherwise. Cite this article:
Maurice Strong Facts for Kids. Kiddle Encyclopedia.