An Australian or New Zealand meat pie is a hand-sized meat pie containing diced or minced meat and gravy, sometimes with onion, mushrooms, or cheese and often consumed as a takeaway food snack.

The meat pie is considered iconic in Australia and New Zealand. It was described by former New South Wales Premier Bob Carr in 2003 as Australia's "national dish". New Zealanders regard the meat pie as a part of New Zealand cuisine, and it forms part of the New Zealand national identity. 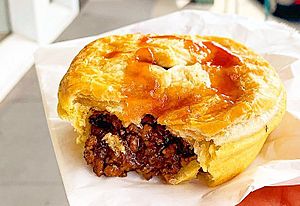 The filling of an Australian meat pie

Manufacturers of pies in Australia tend to be state-based, reflecting the long distances involved with interstate transport and lack of refrigeration capabilities in the early years of pie production. Many pies sold ready-to-eat at smaller outlets are sold unbranded and may be locally produced, produced by a brand-name vendor, or even imported, frozen pies heated prior to serving.

An Australian meat pie was produced in 1947 by L. T. McClure in a small bakery in Bendigo and became the famous Four'n Twenty pie. Due to its relationship with Australian rules football, Four'n Twenty has iconic status in Victoria. Other manufacturers predate this, and the pie manufacturer Sargent can trace their pie making back to 1891.

In South Australia, Balfours and Vili's have been making pies for over 100 years. Both of these pie makers supply pies to various venues hosting Australian rules football games.

Produced in Western Australia, Mrs Mac's Pies are sold nationwide, found mostly in service stations and corner stores, competing with other brands in the contested takeaway hotbox market on the basis of quality and fillings other than the normal fare.

In Victoria, some of the well known and famous pie makers include the makers of two of Australia's most famous pies - Four'n Twenty and Patties - both manufactured by Patties Foods in Bairnsdale.

Australian meat pies were introduced into the United States in 1994 by Mark Allen, of Boort, Victoria, when he and his wife, Wendy, began operation of Pacific Products, Inc. in Marietta, Georgia. Pacific Products was a wholesale only business, selling their pies to chain retailers throughout the United States. Although Pacific Products is no longer in business, Allen and his partner Neville Steele opened the Australian Bakery Cafe in Marietta, a retail bakery which also ships its products throughout the USA.

In 1977, during the time that American fast food restaurants moved into New Zealand, Progressive Enterprises created Georgie Pie, a fast food restaurant with a menu based on meat pies. The pies were batch made and frozen at Progressive's Mangere plant. The first Georgie Pie restaurant opened in Kelston, Auckland, and at its peak in the mid-1990s had become a chain of 32 restaurants across New Zealand. However, after a major expansion, Georgie Pie became uneconomic to run and was eventually sold to McDonald's New Zealand in 1996. The last restaurant at Mission Bay, Auckland, closed in 1998. In June 2013, McDonald's started a trial relaunch of Georgie Pie, selling one flavour of pie (Steak Mince 'n' Cheese) through eleven of its restaurants in Auckland and Hamilton.

The meats allowed by FSANZ to make up at least 25% of a meat pie are beef, buffalo, camel, cattle, deer, goat, hare, pig, poultry, rabbit and sheep. Kangaroo meat, a leaner alternative, is also sometimes used. However, most pie manufacturers specify 'beef' in their ingredients list; typically, those using other types of meat will simply put 'meat' in the list instead. FSANZ requires that a meat pie must contain a minimum of 25% "meat flesh". Meat flesh includes the skeletal muscle of any slaughtered animal as well as any attached animal rind, fat, connective tissue, nerve, blood and blood vessels. Only offal (such as brain, heart, kidney, liver, tongue, tripe) must be specified on the label. Wild animals ("slaughtered ... in the wild state") may not be used.

Started in 1990 and held annually since, the Great Aussie Pie Contest was created to find the best everyday commercially produced meat pie produced in Australia, to promote the higher quality pie production as well as attempting to increase media attention upon the foodstuff, the iconic meat pie often dwarfed by the omnipresent advertising of fast food chains.

The contest attracts various pie-makers from all over Australia; the pies for the contest are judged anonymously to avoid bias towards or against specific bakeries or states. Run in parallel to the main contest is one for gourmet pies, with categories for such fillings as chicken, seafood and even vegetarian pies. As well as the main prize, certificates of excellence are awarded for entries that reach set quality standards. The main award is highly coveted due to the greatly increased sales it generates, with many people travelling interstate to sample the winning pie.

In New Zealand an annual pie competition has been held since 1997. The Bakels New Zealand Supreme Pie Awards aims to recognise the best pie manufacturers in New Zealand, assisting them in producing award-winning pies and continuing to help foster and encourage developments within this category of baking.

They were entered in 11 categories – mince and gravy; chicken and vegetables; gourmet meat; bacon and egg; gourmet fruit; steak, vegetable and gravy; steak and cheese; vegetarian; mince and cheese; seafood and commercial wholesale pies. The pies were judged on presentation, the pastry on the top and bottom, the filling and the profile.

All content from Kiddle encyclopedia articles (including the article images and facts) can be freely used under Attribution-ShareAlike license, unless stated otherwise. Cite this article:
Meat pie (Australia and New Zealand) Facts for Kids. Kiddle Encyclopedia.