Mikhail Aleksandrovich Sholokhov (24 May 1905 – 21 February 1984) was a Soviet/Russian novelist and winner of the 1965 Nobel Prize in Literature.

And Quiet Flows the Don

Sholokhov was accused of plagiarizing And Quiet Flows the Don, which made his international reputation. Sholokhov's detractors claimed that it was written by Fyodor Kryukov, a Cossack and anti-Bolshevik, who died in 1920. In 1987, several thousand pages of notes and drafts of the work were discovered and authenticated, including chapters excluded from the final draft. An analysis of the novel has unambiguously proved Sholokhov's authorship. The writing paper dates back to the 1920s: 605 pages are in Sholokhov's own hand, and 285 are transcribed by his wife Maria and sisters.

An asteroid in main-belt is named after him, 2448 Sholokhov. 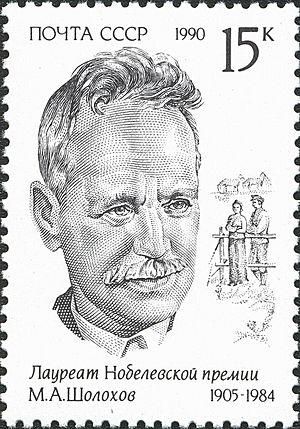 All content from Kiddle encyclopedia articles (including the article images and facts) can be freely used under Attribution-ShareAlike license, unless stated otherwise. Cite this article:
Mikhail Sholokhov Facts for Kids. Kiddle Encyclopedia.