Midland Beach (formerly known as Woodland Beach) is a Staten Island neighborhood. It lies along the east-central coast of the island, in the area known locally as the "Mid-Island, Staten Island," or, according to some, the "East Shore." To its immediate west is Grant City, south lies New Dorp Beach with Graham Beach and South Beach bordering it on the north. The Miller Field border and Prescott Ave is the West border (formerly, a lane called Maplewood Terrace paralleled New Dorp Lane), Poultney Street/Laconia Ave to the North, the Lower New York Bay, to the South, and Seaview Ave to the East. Father Capodanno Boulevard and Midland Avenue are Midland Beach's two main arteries. 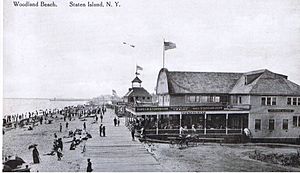 During the late 19th and early 20th century, Midland Beach was a popular beach resort. In 1896, Midland Beach began attracting residents and tourists who came by trolley or excursion boats from Manhattan and Newark, NJ. Resorts, complete with hotels and amusement attractions, drew thousands daily. Besides its hotels and amusement park, it offered concerts, a fishing pier, vaudeville entertainment and gambling. However, all of this is no longer in existence except for the new Ocean Breeze Fishing Pier which opened in September 2003. The Ocean Breeze Pier is the largest steel and concrete recreational pier built in the last 100 years on the Atlantic Ocean in the New York region.

Unlike much of Staten Island, Midland Beach is mostly Irish-American. Rainstorms on the island caused wind or water damage (such as flooded bungalows) in Midland Beach in the 1970s, due to its lack of infrastructure and storm sewers and proximity to the coast. But the City of New York installed a new, very large storm sewer system down Greeley Avenue in 1979, which has resolved the flooding issues for most of the newer housing stock in the neighborhood. Today, the bungalows built as summer homes are owned or rented by locals for permanent residence(according to data compiled by the Roman Catholic Archdiocese of New York, the parish of St. Margaret Mary, which serves Midland Beach, is a middle class parish on Staten Island based on per capita income).

The neighborhood once had its own post office branch, bearing the postal code "Staten Island 11, New York." The building that housed the post office, located at 553 Lincoln Avenue, was one of the smallest.The post office closed in 1949.

Midland Beach was devastated by the storm surge caused by Hurricane Sandy on October 29, 2012. But since has made a huge stride at returning to normal. Midland beach has many wonder old tree's and the locals are very friendly.

The Midland Beach (New Creek) Bluebelt, part of the larger Staten Island Bluebelt, is now being constructed by the New York City Department of Environmental Protection throughout the northern edge of the neighborhood, where most of these bungalows stand. This comprehensive watershed wetlands will alleviate much of the flooding that occurs in this low-lying area. The land will be protected for passive residential use and absorb storm water runoff. Stone bridges, culverts, viaducts, walls and tree plantings will beautify the neighborhood and eventually eliminate the blight that has plagued the northern edge of Midland Beach since the 1960s.

All content from Kiddle encyclopedia articles (including the article images and facts) can be freely used under Attribution-ShareAlike license, unless stated otherwise. Cite this article:
Midland Beach, Staten Island Facts for Kids. Kiddle Encyclopedia.