Miller Place is a hamlet and census-designated place (CDP) in the Town of Brookhaven, Suffolk County, New York, United States, on the North Shore of Long Island. Miller Place has been inhabited since the 17th century and is named for the Miller family that included many of its initial settlers. For most of its history, the community functioned as an agriculture-based society. Despite preserving much of its historic identity, changes in the 20th century have transitioned the hamlet into a desirable and densely populated suburban area. The population was 11,723 at the 2020 census.

The land that Miller Place occupies was purchased from the native Setalcott tribe in 1664 by settlers of Setauket. The parcel also included what would become Mount Sinai, New York, an adjacent community of similar character with which Miller Place would share a variety of functions throughout its history.

The first known dwelling in the area was constructed in the 1660s by Captain John Scott, an important figure in Long Island's early history. This house was named Braebourne and features on a map of the New England region credited to Scott, who served as a royal advisor and cartographer among other occupations. This abode, on the eastern side of Mount Sinai Harbor, was one of three houses John Scott commissioned, and the actual occupier is unknown. 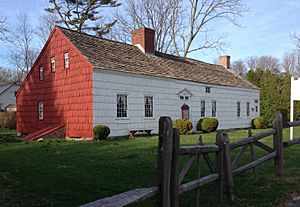 The William Miller House, with sections dating from 1720 to 1816

While the original settler of Miller Place is unknown, the settling of the region is largely accredited to the original Miller family. In 1679, an East Hampton settler named Andrew Miller purchased a 30-acre (120,000 m2) plot. Miller was a cooper by profession, and records indicate that he had emigrated from either Maidstone, England or Craigmillar, Scotland.

By the early 1700s, the community had become known as Miller's Place. The Miller family expanded well into the 18th century and continually developed houses in the northern part of the hamlet. The Millers were in time joined by members of such families as the Helmes, Robinsons, Burnetts, Hawkins, Woodhulls, and Thomases. Many roads in the present hamlet have been named after historical families.

The oldest extant house is the home of William Miller, Andrew Miller's grandson, composed in three sections between 1720 and 1816 at a prominent location on North Country Road. The hamlet's many extant historical structures are centered on this thoroughfare, forming the core of the Miller Place Historic District. Listed on the National Register of Historic Places in 1976, it became the first historic district in the Town of Brookhaven. Separately listed is the Samuel Hopkins House. 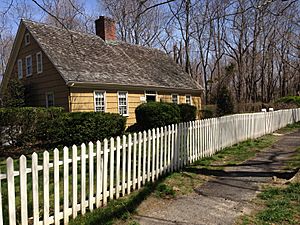 The American Revolutionary War divided the town, with the majority siding with the Patriot cause but families being split across both lines. A number of midnight raids occurred, one of which resulted in the shooting of a teenaged Miller who had peered out of his window to check on the commotion. The march of Benjamin Tallmadge, who led eighty men to the victorious overthrow of a British stronghold at Manor St. George, traversed along the town's western border.

The first two public schools in the hamlet were established in 1813 and 1837. In 1834 the Miller Place Academy, a private school, was established under the leadership of a Yale graduate. Though the academy itself closed in 1868, it served as a public school from 1897 until the 1937 opening of what is now the North Country Road Middle School. The Miller Place Academy structure remains as one of the community's symbols and currently houses a free library. 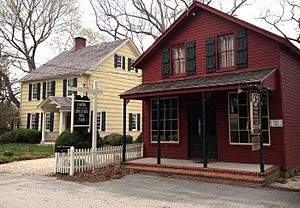 Built in 1890,The Miller Place Country General Store, which formerly served as a combined general store and town post office 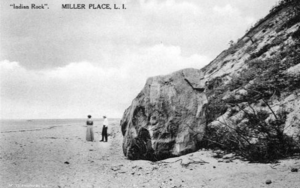 In 1895 the hamlet became home to a station of the Long Island Rail Road, which was located near the present-day intersection of Sylvan and Echo avenues. It transported people to stops westward to Port Jefferson and New York City or eastward to Wading River. After the station was destroyed in a 1902 fire, a new one was built the next year. However, this building was destroyed in 1930 by another fire, and the eastern railroad lines were soon abandoned. In 2013 an agreement was signed between local politicians and the Long Island Power Authority (LIPA), which currently manages the strip on which the railroad operated, to convert this land into a public bicycle trail.

In the latter 19th century, Miller Place became a popular summer resort location. This led to a building boom of beach-side bungalows, rustic log cabins, and commercial activities to accommodate the new seasonal residents. A barn-like building known as the Harbor House operated as a dormitory-style vacation house for young girls until it was destroyed in a 1962 fire. Camp Barstow, a Girl Scout camp near the beach, was active until 1980 and has since become public parkland. 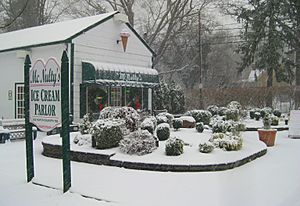 In the decades following World War II, the population of Miller Place greatly expanded. The majority of beach cottages were repurposed as family homes and the town became home to many residents who commute daily to New York City. Commuters either use the Long Island Rail Road, with the nearest stations in Port Jefferson and Ronkonkoma, or drive along the extensive highway system that had been developed by Robert Moses. A number of residents also work at nearby Stony Brook University and Brookhaven National Laboratory.

The center of commerce within the hamlet has largely transitioned from the historic North Country Road to the modern Route 25A. Along North Country Road is McNulty's, a family-owned ice cream parlor and a fixture of the hamlet, and a handful of inns and restaurants located in historic structures. Route 25A is of a more suburban character, with most businesses being corporate chains and located in strip malls. Also along Route 25A are multiple pizza parlors, a bagel store, a deli, and Crazy Beans, a local coffee shop and bar.

A 2012 plan by the Town of Brookhaven aims to comprehensively manage Route 25a between Mount Sinai and Wading River under planning strategies counter to those of car-oriented mid-century suburbia. For Miller Place, it intends to transition the section at Echo and Sylvan Avenues into a traditional downtown center with new mixed-use development and an expanded Sylvan Avenue Park that would compliment the current town post office and senior center. The plan additionally calls for the preservation of the DeLea Sod Farm, the largest agricultural parcel remaining on the Miller Place stretch of Route 25a. 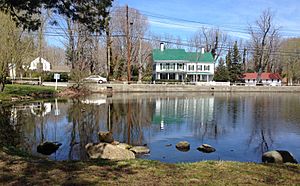 Miller Place is located on Long Island's North Shore and contains a 2-mile section of beach. It also hugs the east side of Mount Sinai Harbor, which it shares with neighboring Mount Sinai and Port Jefferson. 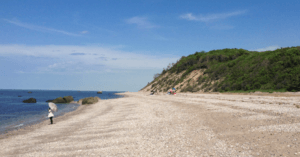 Beach on the Long Island Sound in Miller Place

Though the most popular beach in the area, Cedar Beach, is technically owned by adjacent Mount Sinai, Miller Place owns most of the land leading to this peninsular beach and thus has more residences in its vicinity.

The area is hilly in some patches, mostly near the beach, but generally has desirable grass and trees. Though the soil is suitable for agriculture, desire for housing has led most farms to be developed into suburban housing communities or commercial locations.

Each September since 1981, the William Miller House has been the home of the Miller Place-Mount Sinai Country Fair. This annual festival includes house tours, arts and crafts, and antique merchants. A number of attendees dress in colonial-period costumes. It is managed by the Miller Place-Mount Sinai Historical Society, an organization founded in 1979 that aims to preserve and promote the history and culture of the surrounding communities. The society acquired the William Miller homestead during its first year and, in addition to opening the grounds for the country fair, gives house tours by appointment throughout the summer months. 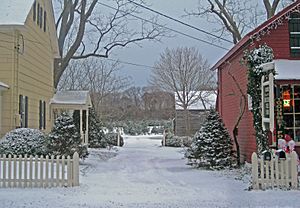 Entrance to the Carter Christmas Tree Farm, the only extant farm north of Route 25A

The center of commerce within the hamlet has largely transitioned from the historic North Country Road to the modern Route 25A.

Along North Country Road is McNulty's, a family-owned ice cream parlor and a fixture of the hamlet, and a handful of inns and restaurants located in historic structures. Route 25A is of a more suburban character, with most businesses being corporate chains and located in strip malls. Also along Route 25A are multiple pizza parlors, a bagel store, a deli, and a local coffee shop and bar.

The hamlet is home to many residents who commute daily to New York City. Commuters either use the Long Island Rail Road, with the nearest stations in Port Jefferson and Ronkonkoma, or drive along the extensive highway system that had been developed by Robert Moses. A number of residents also work at nearby Stony Brook University and Brookhaven National Laboratory. 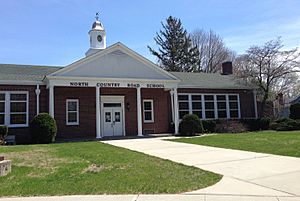 The four schools of the Miller Place Union Free School District are scattered throughout the hamlet and serve both Miller Place and much of the hamlet of Sound Beach. These include the Andrew Muller Primary School (K-2), Laddie A. Decker Sound Beach School (3–5), North Country Road Middle School (6–8), and the Miller Place High School (9–12). The high school has been ranked the 78th in the nation for students taking AP classes. The school's mascot is a panther, while the school colors are red, white and blue.

All content from Kiddle encyclopedia articles (including the article images and facts) can be freely used under Attribution-ShareAlike license, unless stated otherwise. Cite this article:
Miller Place, New York Facts for Kids. Kiddle Encyclopedia.