Missulena is a genus of mygalomorph spiders in the family Actinopodidae, sometimes called mouse spiders. It was first described by Charles Athanase Walckenaer in 1805. M. tussulena is found in Chile, but the rest are indigenous to Australia.

The term "mouse spider" comes from the now-disproven belief that they dig deep burrows similar to those of mice. Scotophaeus blackwalli also shares the common name "mouse spider", but is actually quite different. It is in a different family, is not a mygalomorph, is much smaller, looks very different, and is not considered dangerous.

Mouse spiders are medium-to-large spiders which range in length from 1 cm to 3 cm. Their carapace is glossy, and they have high, broad heads, with eyes spread out across the front of the head. They have short spinnerets, located in the rear of the abdomen. Mouse spiders exhibit sexual dimorphism, with female spiders being all-black; and male spiders having species-specific colouration. The male eastern mouse spider (M. bradleyi) has a bluish patch, and the male red-headed mouse spider (M. occatoria) is brownish or blue-black in color, with bright red-tinged jaws.

Mouse spiders prey mainly on insects, though they may consume other small animals as opportunity presents. The primary predators of the mouse spider include wasps, centipedes, and scorpions.

The mouse spiders have a Gondwanan distribution, with one species found in Chile and the rest distributed throughout Australia, while the nearest related genera occur elsewhere in South America . Similar to trapdoor spiders, mouse spiders live in burrows covered with trapdoors, which can extend to nearly 30 cm (1 ft) in depth. Female mouse spiders generally remain in their burrows; the males wander in search of mates.

Some evidence suggests that the bite of a mouse spider is potentially as serious as that of an Australian funnel-web spider; however, recorded bites by this spider are rare, despite the abundance of some species amid human habitation. Funnel-web antivenom has been found to be an effective treatment for serious bites. 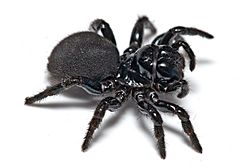 All content from Kiddle encyclopedia articles (including the article images and facts) can be freely used under Attribution-ShareAlike license, unless stated otherwise. Cite this article:
Missulena Facts for Kids. Kiddle Encyclopedia.