Mitcheldean is a historic market town in the east of the Forest of Dean, Gloucestershire, England.

Mitcheldean was a thriving community for many centuries due to the town's proximity to iron ore deposits. During the 19th century, the town grew due to revenues produced by the local brewing industry, while in the 20th century the town grew further due to the Rank Xerox photocopier factory. Although this industry significantly declined during the latter half of the 20th century, much of the former Rank Xerox site (now Vantage Point Business Village) is now occupied by small businesses, new manufacturing and distribution businesses.

There are several shops in the centre of the town, a co-operative store, a butcher, a greengrocer, Several hairdressers, a pharmacy, a florist and several fast food outlets. There are also a library, a surgery, a town hall and two pubs. 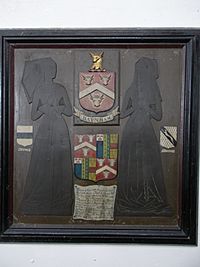 Mitcheldean's wealthy tradition is evident in some of its buildings in the town centre, particularly the church of St. Michael.

Mitcheldean has 2 mens team. The team competes in the North Gloucestershire Association Football League. The club also has a Ladies team and a thriving youth section

All content from Kiddle encyclopedia articles (including the article images and facts) can be freely used under Attribution-ShareAlike license, unless stated otherwise. Cite this article:
Mitcheldean Facts for Kids. Kiddle Encyclopedia.