Lydney is a town and civil parish in Gloucestershire, England. It is on the west bank of the River Severn in the Forest of Dean District, and is 16 miles (25 km) southwest of Gloucester. The town has been bypassed by the A48 road since 1995. The population was about 8,960 in the 2001 census, reducing to 8,766 at the 2011 census.

Lydney has a harbour on the Severn, created when the Lydney Canal was built. Adjoining the town, Lydney Park gardens have a Roman temple dedicated to Nodens. 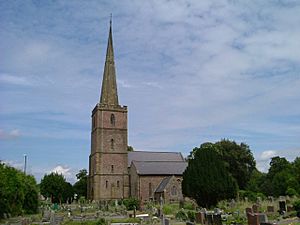 In the Iron Age a promontory fort was established at Lydney Park and later used for iron ore mining. In the late Roman period, a Roman temple to Nodens was built on the site of the fort.

In 1588 the Vice-Admiral of England Sir William Winter was granted the manor of Lydney in recognition of his services against the Spanish Armada. In 1723 the Winter family sold their Lydney estate to the Bathurst family

In 1810, docks were constructed to capitalise on the town's location, close to the River Severn. The River Lyd flows through the town and into the Severn.

In 1935, Charles Bathurst was created Viscount Bledisloe of Lydney upon his retirement as Governor-General of New Zealand.

On 31 August 1962, the Beatles played at Lydney Town Hall

In 1964 the town was the site of the Lydney Murder, a significant case in the history of the use of entomology to assist criminal investigations. On 28 June 1964 a body was found in woods near Bracknell. By studying the maggots found on the body, forensic entomologist Professor Keith Simpson was able to establish a date of death of around 16 June 1964. Missing persons records for that date led the police to believe that the body was that of Peter Thomas, who had gone missing from his home in Lydney. Fingerprints confirmed the identification. William Brittle, a business partner of Peter Thomas, was convicted of the murder. The Lydney Murder was the subject of an episode of the Discovery Channel documentary: "Crime Museum UK with Martin Kemp".

The Severn Railway Bridge crossed just north of Lydney from Purton to Sharpness on the eastern bank. Built in the 1870s, it was damaged beyond repair by a pair of oil tanker barges in 1960. The barges hit Pier 17 bringing down two bowstring girders. There have been several plans to renew the link.

Lydney railway station, run by Transport for Wales which serves the town, is located on the Gloucester to Newport Line, with connections from the town centre by the Dean Forest Railway. Lydney Canal was once an important harbour for shipping timber, coal and iron from the Forest of Dean. It is now a harbour for pleasure craft. 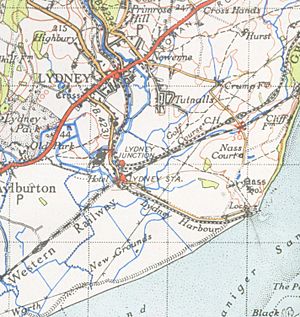 The original name of Mumford Body & Engineering Company Limited was changed to Lydney Coachworks Limited in 1947 to continue bus bodybuilding work. Orders came mainly from local companies such as Red & White, United Welsh and Newbury & District plus a surprise order from Leigh Corporation in Lancashire. After only a short time the coachworks closed down in March 1952, the uncompleted orders being transferred to Bristol TCC and Eastern Coach Works.

The town's rugby football club plays rugby union and is based at Regentsholme. The club had successful runs in the John Player Cup during the 1980s, including a match against Sale F.C. which was televised on the BBC's Rugby Special. There is also a leisure centre which contains an indoor swimming pool, a gym and more.

Cricket is also popular within Lydney, with the local side running three teams in various leagues, as well as having a popular social scene located within the club. Former Glamorgan captain and England opening batsman Steve James began his career at the club. Lydney was also the first English club of England wicket-keeper Geraint Jones.

Lydney has an outdoor swimming pool, the Bathurst Swimming Pool built in the 1920s, open from May until early September. It is operated by volunteers (excluding the life guards).

Freedom Leisure Lydney is located at the Dean Academy, the local secondary school.

Lydney Golf Club was a nine-hole course located off Lakeside Avenue. The club has built a new course on a site located on the opposite side of the Lydney Bypass.

Lydney Twonkers Scrabble Club play their home games at the town's library. The Twonkers were Western Area Scrabble League champions in 2001 and 2005 and were twice runners-up in the National Scrabble Club Knockout Tournament in 1999 and 2003.

Bathurst Park in the centre of the town (not to be confused with Lydney Park on the town's outskirts) is home to several senior and junior football and cricket teams.

All content from Kiddle encyclopedia articles (including the article images and facts) can be freely used under Attribution-ShareAlike license, unless stated otherwise. Cite this article:
Lydney Facts for Kids. Kiddle Encyclopedia.