Molalla /məˈlɑːlə/ is a city in Clackamas County, Oregon, United States. The population was 8,108 at the 2010 census.

Since the late 1990s the city has been experiencing a surge in growth and expansion in the residential sector.

Molalla is located in the foothills of the Cascade Range, near the Mount Hood National Forest, 15 miles (24 km) south of Oregon City and 13 miles from Interstate 5. Molalla is surrounded by farms and rural residential development. There are many rock quarries, and thousands of acres of private timberlands, that feed natural resource materials into the economy. Several of the tree farms are managed for totally maintained and sustained forest.

This region experiences warm (but not hot) and dry summers, with no average monthly temperatures above 71.6 °F (22.0 °C). According to the Köppen Climate Classification system, Molalla has a warm-summer Mediterranean climate, abbreviated "Csb" on climate maps. 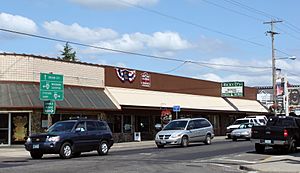 There were 2,857 households of which 44.8% had children under the age of 18 living with them, 53.9% were married couples living together, 12.2% had a female householder with no husband present, 6.2% had a male householder with no wife present, and 27.7% were non-families. 22.5% of all households were made up of individuals and 9.5% had someone living alone who was 65 years of age or older. The average household size was 2.82 and the average family size was 3.30.

There were 1,948 households out of which 43.8% had children under the age of 18 living with them, 56.7% were married couples living together, 11.6% had a female householder with no husband present, and 26.8% were non-families. 21.6% of all households were made up of individuals and 9.2% had someone living alone who was 65 years of age or older. The average household size was 2.84 and the average family size was 3.29.

Molalla is the home of the Molalla Buckeroo rodeo (it began in 1913, the same time as the city was founded) and the Apple Festival. The Pacific Coast Freestyle Championships, a model airplane aerobatic tournament, has been held there for 14 years in late July. Several Latino rodeos are held at the rodeo facility by "LaFortuna" in spring, mid-summer, late summer and fall, bringing tens of thousands of Latino families to celebrate in the community.

There is a miniature steam train, the Shady Dell Pacific Railroad, in Molalla Train Park three miles east of Molalla. An interesting and free exhibit of Rodeo History Honors the "Heroes" of Rodeo memorialized in large brass plaques placed in the sidewalks of Molalla's city core. The Horace L. Dibble House and the Fred Vonder Ahe House and Summer Kitchen are buildings in Molalla on the National Register of Historic Places (NRHP) that have been preserved by the Molalla Area Historical Society. The NRHP-listed Rock Creek Methodist Church and William Hatchette Vaughan House are also in the Molalla area.

The Molalla River corridor offers opportunities for outdoor activities, including fishing, hunting, and hiking. Along the corridor to the east, Table Rock is a favorite local rocky promontory that provides visitors with a view of Molalla and the surrounding countryside for miles in every direction. Neighborhood and community parks include Fox, Clark, Long, and Ivor Davies Parks. Clark Park has a free disc golf course and playground. Long park has a playground, a pavilion, and a beautiful bear carving. Fox Park hosts summer concerts and has a playground and splashpad for children. It also has a pavilion. A long pedestrian and bicycle-friendly path extends through Ivor Davies Park over several small bridges and around a fish pond.

All content from Kiddle encyclopedia articles (including the article images and facts) can be freely used under Attribution-ShareAlike license, unless stated otherwise. Cite this article:
Molalla, Oregon Facts for Kids. Kiddle Encyclopedia.